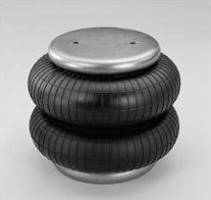 Cylinders in BCS series are equipped with 1.4301 SS passivated plate, and are resistant to corrosion and acids as well as many detergents. Units have working diameters of 150-400 mm and, depending on series, strokes up to 273 mm are possible. Featuring diameters of 150-385 mm and operating temperatures of -20 to +130Â°C, BCE series include epichlorohydrin rubber that resists media, acids, oil, and chemicals. Used for angles of tilt up to 30Â°, both series allow forces of 0-71.2 kN.

Flexibility Even Under Difficult Conditions: New Bellow Actuators from Rexroth

Rexroth is expanding its product range to include pneumatic bellow actuators in the BCS and BCE series. Unlike conventional pneumatic cylinders, bellow actuators do not have a piston rod. The installation height of the actuator is thus significantly reduced, saving design height.

Bellow actuators are dynamically robust products. They are resistant to weather and many environmental influences. The new epichlorohydrin rubber makes the BCE series bellows highly resistant to media, acids, and oil, as well as many chemicals such as acetone, fuels, and grease.

Bellow actuators can also operate in difficult conditions. The bellows have no mechanical friction surfaces that move against one another, as is the case with seals. This means that the cylinder is wear-free even under adverse environmental conditions involving dirt, dust, granulate, and mud. Thanks to the new epichlorohydrin rubber, the latest BCE series bellow actuators from Rexroth can be operated in a temperature range from -20°C to +130°C.

The cylinders in the BCS series are equipped with a passivated plate made of 1.4301 stainless steel. This cylinder is resistant to corrosion and acids, as well as many detergents, and is thus suitable for use in the food industry, offshore applications, and the pharmaceutical and process industries.

Depending on the type, bellow actuators can be used for angles of tilt that are up to 30 degrees. As a result, costly connection elements and hinge constructions are unnecessary.

When not under pressure, bellow actuators can easily be installed with minimum height. That saves assembly time and expenses. The flexible bellow actuator can compensate for assembly inaccuracies.

Bosch Rexroth AG is one of the world's leading specialists in the field of drive and control technologies. Under the brand name of Rexroth the company supplies more than 500,000 customers with tailored solutions for driving, controlling and moving machinery used in industrial and factory automation as well as in mobile applications. Bosch Rexroth is a partner for industrial applications and factory automation, mobile applications and using renewable energies. As The Drive & Control Company, Bosch Rexroth develops, produces and sells components and systems in more than 80 countries. In 2008 Bosch Rexroth AG, part of the Bosch Group, achieved sales of around 5.9 billion Euro with 35,300 employees.