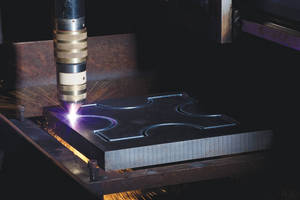 In addition, the torches are manufactured with a specially designed coupler ring that improves an operator’s grip on the torch, allowing for a better, tighter connection between the torch head and the base. Finally, the torches feature a dust seal to keep metal chips and other debris from collecting on the coupler threads.

“As the inventor of quick-disconnect torches, Hypertherm has really perfected the technology through the years,” said Martin Geheran, product marketing manager for Hypertherm’s Centricut brand. “We feel fortunate to share this technology with Kaliburn owners so they too have an affordable, and high performing option for their systems.”

Complimenting the new quick disconnect torch, Hypertherm also offers a full line of Centricut performance consumables for the Spirit and ProLine cutting systems which offer twice the life and improved cut quality compared to the OEM, all at a competitive price.

Centricut brand torches and consumables, like all Hypertherm products, are designed with critical-to-function tolerances to deliver the best quality product every time. Businesses interested in a free trial of any Centricut brand product can contact Hypertherm at 800-753-7623 or their authorized Hypertherm distributor.

Hypertherm’s Centricut brand engineers and manufactures advanced plasma and laser cutting consumables. Its product line includes consumables that deliver increased value to people who own most any non-Hypertherm cutting system including systems by ESAB, Kjellberg, and Trumpf. All Centricut brand products are engineered and manufactured to exacting standards and incorporate the latest technological advances that help to reduce operating costs, while delivering increased cut speed and quality. Centricut products include free technical support and come with same-day shipping.
Share