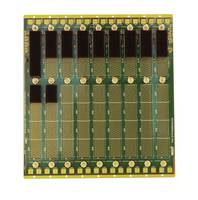 Waterloo, Ontario — Feb 22, 2019 – Pixus Technologies, a provider of embedded computing and enclosure solutions, has released new OpenVPX backplanes for 6U applications. The designs include a 9-slot, 6-slot power and ground, 5-slot, and a 1-slot development backplane.

The 5-slot 6U OpenVPX backplane from Pixus has a BKP6-CEN05-11.2.5 profile. It features PCIe Gen3 speed performance. For development applications, Pixus now offers power and ground only backplanes. This allows signals to pass through to the rear transition modules (RTMs) for easy prototyping and de-bugging. These backplanes come in 1-slot and 6-slot versions. The one slot version also features an interface for a VITA 62 power supply. The Pixus roadmap includes a 6U, 16-slot OpenVPX backplane utilizing a fully loaded system.