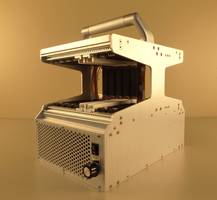 The New VPXD0500 Series Development Chassis for 3U openVPX boards and backplane systems. The product is offered with 600W or 1200W modular power supply with Vita 62 or specialty options. The chassis comes with carrying handle, fan speed control and optional card guides for conduction-cooled boards.

Waterloo, Ontario — Nov 01, 2018 – Pixus Technologies, a provider of embedded computing and enclosure solutions, has released 3U versions of its low-cost open frame development platform for OpenVPX and other architecture backplane systems.

The VPXD0500 series accepts up to 8 slots of 3U OpenVPX backplanes in a 1.0” pitch. Other 3U backplanes such as CompactPCI or VME can also be utilized in the enclosure. Versions with VITA 66 for optional contacts and/or VITA 67 for RF contacts are available. A 600W or 1200W modular power supply for OpenVPX voltages is standard with VITA 62 or specialty options available. Other features include a convenient carry handle, fan speed control, and optional card guides for conduction-cooled boards.

Pixus offers development/test chassis in various architectures and sizes, including versions for 6U boards. The company also provides backplanes, board handles and faceplates, rackmount chassis platforms, and rugged/ATR enclosures.