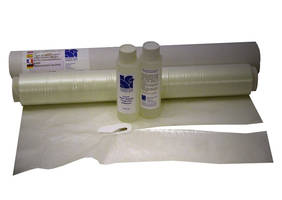 When it comes to pipe purging, it is not desirable, nor cost effective to simply pour inert gas into the pipe assembly in the hope that a good purge is achieved. A tough, leak tight purging barrier is required.

Luke Keane, Technical Sales Manager for Huntingdon Fusion Techniques HFT® said: “It is so easy to cut a circle of water-soluble film and place it a short distance away from the root gap before welding, pasting in place with the Argweld® Water Soluble Super Adhesive® to ensure a tough leak tight barrier, keeping the purging volume to the barest minimum. Argweld® Weld Purge Film® offers users the opportunity to make significant economies by minimising gas usage and cutting down dramatically on time taken to make a purge, whilst at the same time, achieving a desirably low oxygen level.”

After welding, the water-soluble film can be dissolved and washed away by simply flushing of the pipe interior. Previously, pipe welders might have used water-soluble paper, but as paper contains a high percentage of water which undesirable to have near a weld, the Argweld® Weld Purge Film® is a tremendous new benefit for weld purging.

These affordable kits will save operators high costs by minimising gas usage, reducing purge time and eliminating the need for cleaning. Weld Purge Film® Kits have been designed and developed by HFT®, as a complete accessory to manufacture dams that offer effective shielding and stability.

Huntingdon Fusion Techniques HFT® have a worldwide Exclusive Distributor network, which can be found at www.huntingdonfusion.com.