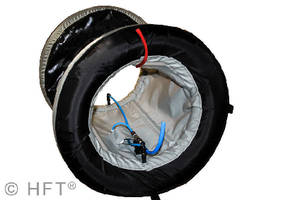 Using IntacalÂ® II combined with integrated PurgeGateÂ® device, QuickPurgeÂ®III System makes it possible to safely inflate dams with argon gas, prior to releasing it for purging space between dams where weld joint is located. Sleeve between dams reduces volume to be purged, ensuring fast purge time down to 10 ppm of oxygen. Available for each API pipe diameter, QuickPurgeÂ®III can be pulled around 90Â° elbows for purging of connecting joints.

Using Intacal® II combined with the integrated PurgeGate® device,makes it possible to safely inflate the dams with argon gas, prior to releasing it for purging the space between the dams where the weld joint is located.

Continuing the constant development of products Huntingdon Fusion Techniques, HFT® has launched this new upgrade of the QuickPurge®II system.

OTHER NOTABLE FEATURES ARE:

The sleeve between the dams reduces the volume to be purged by two thirds, ensuring a really fast purge time down to 10 parts per million of oxygen.

HFT® has a jointly owned Patent for this design, having originally designed it with the help with Babcock International (now Doosan Babcock) for their contract to lay a stainless steel pipeline along the south coast of England for the transport of Liquid Natural gas from the Isle of Grain.

Sleeve lengths for each size have been carefully calculated so that the QuickPurge®III pipe purging system can be pulled around 90º Elbows for the purging of connecting joints.

QuickPurge®III systems are available for each American Pipe Institute (API)  Pipe diameter, with an expansion range to cover all internal diameters from Schedule 10 to schedule 160 and the even thicker pipe wall standards.

Return on Investment (ROI) Charts are available, to show that the payback for each size will normally be between 1 and 2 welds, giving companies the opportunity to make very significant savings on larger contracts.

Materials chosen for QuickPurge®III are such that they are resistant to the higher weld heat present now that the dams are slightly closer to the welds and at the same time exhibiting lower outgassing rates to prevent weld contamination. For welds that are pre-heated and post-weld heat treated, HFT® manufactures the special HotPurge™III matching range for the higher and longer temperature exposure requirements.

In some cases, with QuickPurge®II customers have requested longer sleeves for a variety of applications because of the positioning necessary for the second dam.  That very successful option is also available for  the new QuickPurge®III version.

On large contracts, HFT® will gladly send technicians for installation, to help in the instruction of welders to show how the system works and to explain the methods of use etc. prior to supervising start up.

All HFT® products are covered by their normal 12 months warranty plus an instant, no quibble, replacement guarantee in the event of faults that may occur.
Share