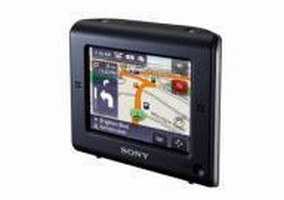 With RDS-TMC real-time traffic receiver built into cradle, Model NV-U71T helps drivers map destination, locate points of interest, and avoid traffic congestion by providing alternate route choice. Anti-glare coating enables 3.5 in touchscreen display to be viewed in any lighting, while super-suction cup adheres to most surfaces in car. Compact unit can be transferred between vehicles, and comes with rechargeable battery that allows up to 6 hours of operation.

When the Traffic Gets Tough, the Tough Get Nav-U

Ready to use right out of the box, this slimmer, easy-to-use device helps drivers map a destination, locate points of interest, find home again and avoid traffic congestion.

With an included RDS-TMC real-time traffic receiver built into a supplied cradle, the device notifies drivers of heavy traffic areas and automatically gives them an alternate route choice. The real-time traffic service requires a separate subscription, but drivers will receive the first 90 days free of charge. For continued traffic service, a subscription will cost $4.95 a month after the initial trial period.

"It's safe and easy to use while driving, and it comes with everything you need to get started," said Allan Jason, vice president for mobile electronics and portable audio products at Sony Electronics. "Our aim is to make navigation easy without sacrificing any of the features drivers need to get where they're going."

Based on customer feedback, Sony developed an intuitive user interface integrated in the new device that eliminates drilling down through multiple menu systems for common functions.

The new Gesture Command(TM) function makes frequently used commands, such as Sony's "take me home" feature, available through simple finger movement on the 3.5 inch touch-screen. Drawing an invisible inverted "V" on the screen activates the feature.

With anti-glare coating, it's easy to see the screen in any lighting. A new super-suction cup for the mounting bracket is made from material that safely adheres to most surfaces in the car. Some states prohibit affixing devices to the windshield. However, with the new mounting device, it can be mounted on most dashboards or a surface on the center console.

The unit's compact design makes it a breeze to transfer between vehicles. Drivers can choose from nearly seven million points of interest -- four times as many as its predecessor -- and destinations from U.S. and Canadian maps pre-loaded on its 2GB Flash memory. Maps of Alaska, Canada, Hawaii and Puerto Rico also come pre-installed on the device.

A powerful speaker ensures that voice prompts are clear and audible. An embedded rechargeable lithium-ion battery allows up to six hours of operation without using the supplied car power adapter.

Pre-orders for the dark metallic blue and silver NV-U71T navigation device are now being accepted at sonystyle.com/navu. The device is expected to be available this winter for about $500 at Sony Style online and retail stores nationwide, as well as at authorized retailers around the country.

Sony will be demonstrating the new nav-u device from Oct. 31 to Nov. 3 at the SEMA (Specialty Equipment Market Association) convention at the Las Vegas Convention Center (booth #1106).

Separate accessories include a second vehicle kit with an additional mounting bracket and a car charger for about $100, as well as an external GPS antenna for about $100. A travel case will also be available for about $30.

Please note that the real-time traffic service provides traffic updates in
49 of the 50 largest markets in the U.S.