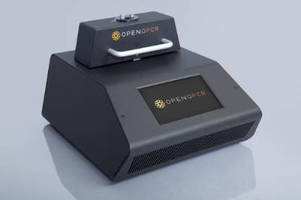 Open qPCR is currently available for $1499 as part of the campaign, and is expected to ship in March 2015. The instrument in capable of genetic genotyping, pathogen presence/absence detection, and relative DNA quantification.

Real-Time PCR is used in diagnostic applications ranging from food safety to viral diagnostics, as well as numerous research applications. "With Real-Time PCR thermocyclers typically costing $20,000 and up, this technology was simply unaffordable to lesser funded university labs, institutes in developing countries dealing with emerging epidemics, and the growing DIYbio/maker movement." says Josh Perfetto, Founder and Chief Executive of Chai. "With Open qPCR, we've lowered the cost of the Real-Time PCR reaction by an order of magnitude."

Features of the new qPCR device include:

The KickStarter campaign runs until December 4(th). The campaign is also raising funds to donate instruments to Ebola clinics in Western Africa.

Chai Biotechnologies is a biotech startup in Santa Clara, CA focused on making the core molecular biological technologies accessible to all, while developing powerful tools for the next generation of synthetic biologists. Chai was founded to develop the Open qPCR  thermocycler announced in this release, and is also the manufacturer of OpenPCR endpoint thermocyclers.

Additional information about Chai Biotechnologies is available at http://www.chaibio.com, or follow our news on @openqpcr(twitter).