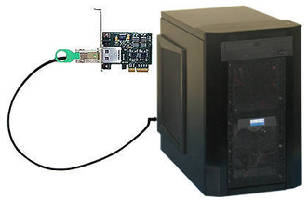 ESCONDIDO, Calif., January 5, 2009 - One Stop Systems (OSS), a global provider of industrial-grade computing systems and components, introduces the PCI Express (PCIe) MicroATX expansion system allowing both PCIe x4 and x8 cable expansion from an upstream host system. The system offers both x4 and x8 cable expansion and three PCIe x4 slots. The system is equipped with a PCIe x4 or x8 host cable adapter that installs into the PCIe connector on the host motherboard. A 3-meter PCIe cable allows access to the host system.

Pricing
The MicroATX Expansion System lists for USD$1,685 (P/N OSS-PCIe-EXP-mATX-xx) and is available immediately. OEM quantities can be quoted on request. Call toll-free at 1-877-GET-CPCI (438-2724) to order or to receive more information.

About One Stop Systems
One Stop Systems designs and manufactures custom and semi-custom computing systems, disk arrays, and components for military, defense, and security applications as well as for the converged communications and industrial control embedded markets. One Stop Systems continues to provide custom and semi-custom computing systems in both COTS (Commercial off the Shelf) and MIL-standard form factors to many of the largest US defense contactors. In addition to providing highly rugged systems, One Stop Systems has become a premier provider of PCI Express-over-cable products for the embedded market. Responsive pre-sales and post-sales technical support, the highest quality computing products, and on-time delivery have long been a hallmark of One Stop Systems' service. For more information, contact our sales department toll free at (877) 438-2724 or visit our web site at www.onestopsystems.com.
Share