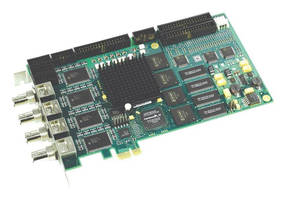 
Las Vegas, NV, December 2, 2008 - The PC_EYE/JPG from American ELTEC is a 16-Channel PCI Express Frame Grabber for security applications using low-cost color cameras. It offers on-board JPEG compression hardware for 16 channels, along with an on-board scaling device and a fast PCI Express Bus interface with a bandwidth of 250 MByte/s. It records analog color camera data via 16 parallel inputs, all of which contain a separate fast AD converter. Thanks to this technology, images can be recorded in real time and stored in the PC's main memory.

The PC_EYE/JPG is intended for security applications where video images from up to 16 color cameras are fed into a PC's main memory for storage or into the graphics board for display. Data is acquired in compressed or in raw format. An on-board scaling unit can transform full-resolution images to CIF size or smaller for efficient display in split screen applications.

There are 16 analog-to-digital converters (ADCs) that up to 16 cameras can be connected to. Each camera has its own ADC (SAA 7113-type) as well as its own color separator. This makes it possible to switch cameras in the digital domain, minimizing multiplex times. Since the analog input is not switched, there is no PLL settling delay, which can take up to several frame times in
other multiplexing schemes.

All standard color and monochrome video cameras are supported in hardware and software. The video standards PAL, NTSC, and SECAM can be used.

Pricing for the PC_EYE/JPG frame grabber is under $1,800 in single piece quantities. Contact American ELTEC for details.

American ELTEC is a division of ELTEC Elektronik AG, headquartered in Mainz, Germany. ELTEC has been an innovator in the design and manufacture of high-performance embedded computer boards, system-level and imaging products for industrial applications since 1978.
Share