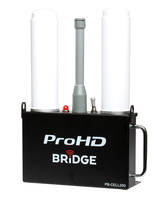 Unlike other bonded solutions, the ProHD Portable Bridge allows live streaming from multiple cameras to HD-SDI decoders or servers at a central location, as well as CDNs like JVCVIDEOCLOUD and Facebook Live. Its dual cellular modems with redundant SIM slots support up to four different cellular providers for bandwidth bonding, data overage protection, or blind spot elimination.

JVC cameras feature a built-in encoder with Zixi™ error correction and variable bit rate control. The encoded signal is sent to the ProHD Portable Bridge via a Wi-Fi camera transceiver, which plugs directly into the camera’s USB port. The two-way signal allows camera operators to change their locations, and also provides remote camera control and IFB audio on select models.

Dual-band Wi-Fi provides two independent, high-speed networks that work together (2x2 MIMO) to maximize throughput. The ProHD Portable Bridge also doubles as a secure, high-speed hotspot, so crew members can connect mobile devices to the internet or an enterprise LAN in the field with a secure VPN. Two RJ-45 connectors allow wired LAN connections as well.

“The ProHD Portable Bridge provides an affordable and reliable option for broadcasters and other organizations that want to provide multi-camera live coverage without the hassle and expense of satellite or microwave trucks,” explained Edgar Shane, general manager of engineering, JVC Professional Video. “It provides reliable and secure uplink back to your broadcast facility or content distribution network.”

The PB-CELL200 ProHD Portable Bridge has an MSRP of $5,500 and will be available at NAB. JVC also offers economical cellular data packages, as well as its JVCVIDEOCLOUD online video and live streaming platform for small and medium-size enterprises.