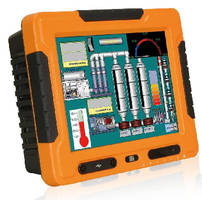 The UPC-12A single core computing series are designed for embedded performance grade applications. Featuring an Intel® GM45/910GMLE/915GME chipset, providing total compatibility in a wide variety of high performance end lower power industrial control applications. The UPC series also provide many expansion interfaces including a standard 32-bit PCI slot for a PCI add-on card, and a PCIe Mini card socket for a PCIe Mini card such as a wireless module. The UPC-12AH includes a sunlight-readable 1000 nits option for high brightness applications such as outdoor ATM machines or military use. All of the UPC series are constructed with rugged die-cast aluminum enclosures. The aluminum enclosures aid in cooling the system, assisting with overall heat dissipation and minimizing the need for fans.

The UPC series is equipped with rechargeable "intelligent battery" which can power the UPC-12A for 40 to 60 minutes without any external power supply. This convenient and manageable smart battery backup can be used as a power bank suitable for mobile installations and power protection for critical environments. The UPC series is designed for mobile equipment such as lift trucks, ATM machines, medical carts, order pick carts, and warehousing and distribution.