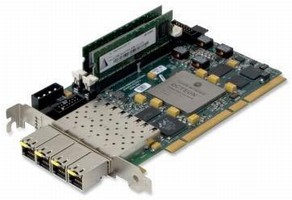 "Demand for high performance secure IP communications and multi-gigabit packet processing continues to grow rapidly," said Rubin Dhillon, Global Director of Communications Product Management at GE Fanuc Intelligent Platforms, "and the WANic 5860, with its next generation bandwidth, responds to that demand. We now offer what we believe to be the widest range of powerful, flexible and reliable packet processing solutions in the industry."

The WANic 5860 software implementation is a comprehensive development package designed to improve time-to-revenue. It is optimized to simplify application integration for multi-core processor development environments. Firmware including a Universal Boot loader (U-Boot) and comprehensive Power On Self Test (POST) is embedded in the hardware. Also included are a Linux Support Package (LSP) and sample application code designed to exercise the WANic 5860. The LSP includes a Linux Operating System and user application diagnostics. The supported operating system is Debian Linux: support for other operating systems is available upon request.

GE Fanuc Intelligent Platforms, a joint venture between General Electric (NYSE: GE) and FANUC LTD of Japan, is a high-performance technology company and a global provider of hardware, software, services, expertise and experience in automation and embedded computing, with products employed in virtually every industry, including manufacturing automation, defense, automotive, telecommunications, healthcare and aerospace. GE Fanuc Intelligent Platforms is a worldwide company head-quartered in Charlottesville, VA, and is part of GE Enterprise Solutions. For more information, visit www.gefanuc.com.