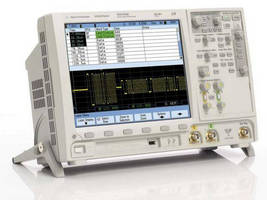 MIL-STD-1553 is a military standard published by the U.S. Department of Defense that defines the mechanical, electrical and functional characteristics of a 1-Mbs serial data bus. The standard was originally designed for military avionics, but now it is used in military and civil spacecraft onboard data handling (OBDH) subsystems. The standard features a dual-redundant balanced line physical layer, a (differential) network interface, time division multiplexing, half-duplex command/response protocol and up to 31 remote terminals (devices).

Until now, capturing and measuring the electrical characteristics of MIL-STD 1553 signals has been a difficult and tedious process using a conventional analog or digital oscilloscope. When engineers set up a scope to trigger and synchronize on specific transmitted words, they often required an external synchronization signal or had to guess at a specific trigger hold-off setting. To determine the contents of a captured and displayed communication packet/word, engineers had to use a visual "bit-counting" technique, which is slow and prone to errors. But with an Agilent InfiniiVision Series oscilloscope equipped with Option 553, engineers now can view MIL-STD 1553 protocol decoded communication time-correlated with their physical-layer signals. With Agilent's unique hardware-based protocol decoding, InfiniiVision scopes can provide the fastest uncompromised waveform and decode update rates in the oscilloscope industry.

Agilent InfiniiVision Series oscilloscopes equipped with Option 553 also can trigger on a wide range of conditions, including data words, command/status words, remote terminal addresses (RTA), sub-addresses and status bits. In addition, the scope can be set up to trigger on, and decode, synchronization field errors, Manchester encoding errors and parity errors.

Engineers also can use InfiniiVision Series oscilloscopes to perform automatic pass/fail eye-diagram tests of 1553 electrical signals with the addition of the mask test option (Option LMT) and Option 553. Agilent provides eight MIL-STD 1553 eye-diagram mask test files that can be downloaded from Agilent's Web site at no charge. Engineers can use the mask test files to test various types of communication traffic to and from bus controllers and remote terminals.

Eye-diagram testing is used in a broad range of today's serial bus applications. An eye-diagram is an overlay of digitized bits that shows when bits are valid, which provides a composite picture of the quality of a system's physical layer characteristics. These characteristics include amplitude variations caused by transmission line effects, reflections, system noise, overshoot, ringing, signal edge placement shift, and jitter.

The Agilent MIL-STD 1553 triggering and real-time decode option (Option 553) for the InfiniiVision 5000, 6000 and 7000 Series 4-channel oscilloscopes is available now at a price of $1,303. The mask test option (Option LMT), which is required for MIL-STD 1553 eye-diagram mask testing, is available now at a price of $660. InfiniiVision Series oscilloscopes range in bandwidth from 100 MHz to 1 GHz, with entry-level prices of four-channel models beginning at $5,200. Additional information about Option 553 is available at www.agilent.com/find/1553.

Agilent Technologies Inc. (NYSE: A) is the world's premier measurement company and a technology leader in communications, electronics, life sciences and chemical analysis. The company's 16,000 employees serve customers in more than 110 countries. Agilent had net revenues of $4.5 billion in fiscal 2009. Information about Agilent is available on the Web at www.agilent.com.