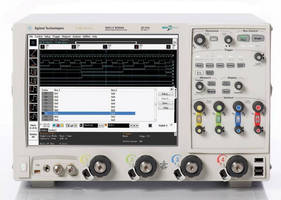 Infiniium 90000 X-Series includes 6 mixed-signal oscilloscope (MSO) models with DDR triggering mode as well as 13 GHz DSO and DSA models. Integrated digital channels of MSO models can function at 20 or 10 GSPS in 8- or 16-channel configurations, respectively.Â Offering 70 MHz to 33 GHz of analog bandwidth, MSOs have up to 400 million points of data capture behind each digital channel. DSO, DSA, and MSO models give engineers access to low-noise and low-jitter measurement.

Agilent Technologies Inc. (NYSE: A) today announced the expansion of its award-winning Infiniium 90000 X-Series oscilloscope family to include the world's highest performance mixed-signal oscilloscope, or MSO. The expansion adds six new MSO models, as well as 13-GHz DSO and DSA models, to the X-Series.

Engineers and developers use MSOs to accelerate testing by employing the additional trigger flexibility for debugging and validating their devices.

The new 13-GHz DSO, DSA and MSO models give engineers access to the industry's lowest noise and jitter measurement floors of the Infiniium 90000 X-Series at an unprecedented low price.

"As system speeds have increased, it has become clear that additional digital channels, with performance appropriate to the analog scope bandwidth, would mark the next breakthrough in insight for our customers," said Jay Alexander, vice president and general manager of Agilent's Oscilloscope Products Division. "Pairing the world's fastest MSO with up to 33 GHz of true analog bandwidth allows engineers to accurately debug and validate emerging technologies such as DDR4-3200."

With the Agilent Infiniium 90000 X-Series, current and future customers who purchase DSO or DSA model oscilloscopes can upgrade to MSO functionality. Most high-speed MSOs available today come with fixed configurations that cannot be upgraded. Agilent's N2834A upgrades let users add MSO capability at any time. This capability, along with Agilent's existing bandwidth and memory upgrades, makes the X-Series one of the most flexible and expandable platforms on the market.

Unlike other MSOs, Agilent Infiniium 90000 X-Series MSOs have up to 400 million points of data capture behind each digital channel. To accommodate sample-rate differences between the high-speed analog channels and the digital MSO channels, this memory depth can be automatically sized with the analog trace length, including the full 2-Gpts memory available on Agilent oscilloscopes. This memory depth allows for fully time-correlated capture of elusive events that span a long time record.

Very fast memory channels, such as DDR3, often have complex signal qualification conditions that can elude even the most adept engineer. Agilent has added a special DDR triggering mode to the new MSOs to perform read/write separation and eye alignment for these complex conditions.

Protocol errors plague even the most mature system designs. While some modern scopes have the ability to move up the protocol stack on the analog channels, an engineer trying to understand root cause can quickly use up the scope's analog channels. Adding an MSO makes up to 16 high-speed digital channels available for the measurement. Protocol checking on the digital channels for a measurement like DDR makes it possible to see the full view of analog impacts while validating protocol compliance.

The MSO uses the same 90-pin connector found on Agilent's logic analyzers. This allows access to a broad range of probing accessories including:

Agilent Infiniium 90000 X-Series MSOs can be ordered today at the prices listed below. Shipments of the MSOs, including upgrades, will begin midyear. The new DSO/DSA 91304A models are available for immediate shipment.

Agilent will be at DesignCon, Santa Clara Convention Center (Booth 201), Jan. 28- 31, to demonstrate high-speed digital solutions that help engineers design, simulate analyze and debug their devices and ensure compliant designs while cutting through the challenges of gigabit digital designs.

About Agilent Technologies
Agilent Technologies Inc. (NYSE: A) is the world's premier measurement company and a technology leader in chemical analysis, life sciences, diagnostics, electronics and communications. The company's 20,500 employees serve customers in more than 100 countries. Agilent had revenues of $6.9 billion in fiscal 2012. Information about Agilent is available at www.agilent.com.