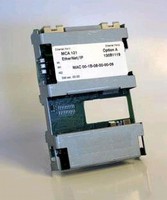 "The MCA 121 option card delivers connectivity to EtherNet/IP based networks via the Common Industry Protocol (CIP(TM)) protocol. It is able to handle a single EIP Class 1 connection with an Actual Packet Interval (API) of just 1 ms in both directions, positioning it as one of the highest performing EIP devices in the market. Users will also benefit from a built-in 2 port switch with diagnostic functions that enables traditional line network topology, while eliminating the need for complex cabling and expensive industrial Ethernet switches," says Flemming Huusmann, Global Product Manager, Fieldbus.

Industrial operations are increasingly utilizing open Ethernet networks to manage their processes. The MCA 121 enables the Danfoss Drives VLT AutomationDrive to connect directly to an EtherNet/IP network, maximizing speed and performance beyond what is possible using a gateway. With the MCA 121 each drive simply acts as another node on the network, with full visibility and full speed connectivity.

Danfoss is a leading manufacturer of precision mechanical and electrical components, with locations in more than 120 countries. Danfoss created the VLT name when they introduced the world's first mass-produced VFD in 1968, and the name has set the standard for high performance quality variable frequency drives ever since.