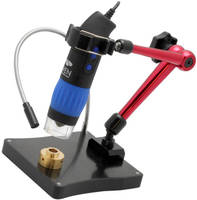 The workbench accessory has a 360-degree swivel arm that firmly grips digital microscopes and cameras at any angle. A high-powered LED light on a 10-inch flexible arms provides added illumination.

“The 3D Stand lets users record data and other notes without losing focus,” says Aven president Mike Shahpurwala. "It’s also a handy way to let others in a workplace or classroom see a live, magnified view without holding the instrument manually."

The stand creates a lightweight inspection station that’s easy to set up and move in production areas and other workspaces, the Aven executive adds.

Digital microscopes with a diameter of 30 or 35 millimeters, such as Aven’s MightyScope, can be mounted securely on the instrument arm’s bracket. It also has a ¼-20 universal camera mount. A tension knob allows easy adjustment of the articulating arm.

The LED illuminator is battery-powered or plugs in via a USB cable that’s included.  A rear knob turns it on or off and allows brightness control.

A technology innovator since 1983, Aven is located in a high-tech corridor of Southeast Michigan.