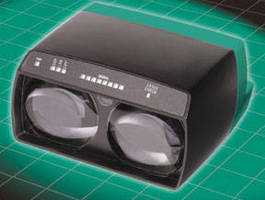 Helpful for maintenance and diagnostics in remote locations, LS680 Series can transmit signals, such as live video and other communication information, without operating controls or programming. Tamper-proof, plug-and-play solutions transmit protocol-free, accommodating various industrial Ethernet topologies without requiring any changes. Series transmits signals from 0-150 m with 180 m threshold distance and data at rate of 100 Mbps via 100 Base-TX interface.

TWINSBURG, OH - Pepperl+Fuchs introduces LS680 Series Optical Data Couplers. With speeds from 33 up to 50 times faster than competitive models, the LS680 is uniquely capable of transmitting signals, such as live video and other communication information, that were previously unavailable in material handling applications. Additionally, the LS680 has no operating controls such as push buttons, switches, or potentiometers, and requires no programming, making it a true tamper-proof, plug-and-play solution.

"Live video can be very helpful for maintenance, diagnostics, and feedback, especially for very remote or inaccessible locations, like high bays in a warehouse," says Jeff Allison, Product Manager. "In the past, users may have to shut down a line and send a technician to trouble-shoot if there is overhang from a bay. Now, these issues can be addressed remotely with live video from the trouble spot, which saves time and makes for a more secure system."

The LS680 optical data transmitter transmits protocol-free, meaning various industrial Ethernet topologies such as Ethernet IP, PROFINET, and TCP/IP can all be transmitted on the same product without changing a thing. It transmits signals from 0 meters to 150 meters, with a 180 meter threshold distance. It transmits data consistently at a rate of 100 MBit/s via a 100 Base-TX interface.

"The LS680 is able to achieve significantly higher transmission speeds than WiFi and RF-based methods because data is optically transmitted and is not affected by large masses of metal that are common in warehouses or ASRS's. The WiFi and RF-based signals are attenuated with metal, so the signal quality and speed vary depending on where it is," explains Allison. "Additionally, competitive optical data couplers often save data packets before they are transmitted. This typically results in speeds that are just two to three percent of that available with LS680 optical data couplers, which transmit data packets immediately."

"The LS680 employs a built-in alignment aid in the front lens that is visible from long distances. The LED flashes at varying frequencies to indicate how good the optical signal is. It also has an 8-segment LED display on the front of the housing to further indicate eight levels of signal strength. This can be helpful for optimizing the placement of the couplers to achieve the best signal," says Allison.

The LS680 is designed to aid in the positioning of moving stacker cranes / vehicles in Automated Storage and Retrieval Systems (ASRS) by relaying placement information from the stationary control system to the mobile vehicle controls. The LS680 can also send images from a camera on a high-bay stacker crane, retrieve the location of pallet pick-ups on pallet transfer vehicles, and can also be used to transmit data in overhead monorail systems, mobile transport units, automated guided vehicles and carts, and material transfer systems.