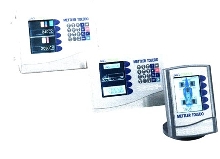 The configuration software displays an image of how the operator panel will appear during operation, along with a menu and tool bars containing the different object types. The pre-defined objects allow for graphical display of system information using bar graphs, bitmaps and simple animation. The user simply drags an object onto the screen image in the desired location. Double-clicking on the object brings up a dialog box containing object-related parameters.

Available in three enclosure styles, the new JAGXTREME OI offers a development platform that supports application reuse and portability. The terminal also has the ability to easily leverage the full range of the Internet-enabled JAGXTREME platform, including the highly optimized JagBASIC, open Ethernet-TCP/IP and Jag clustering.
Share