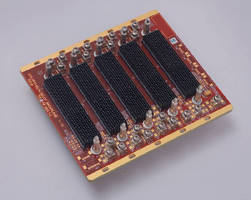 The 5-slot OpenVPX backplane from Pixus features a mesh topology. The versatile backplane topology and slot size makes it an attractive choice for many development systems. The 6-slot version has a distributed topology. The backplanes are designed for speeds from 3.125 Gbaud/s to 6.25 Gbaud/s and come with or without RTM connectors.

The OpenVPX backplane product line from Pixus come in various VITA 65 compliant backplane profiles and to VITA 46 specifications. The 3U and 6U backplanes can easily be designed to specific customer profiles and are geared to provide a combined superior performance and price competitiveness.

Pricing for the 3U OpenVPX backplanes starts under $1500.00 depending on quantity and configuration.  Lead time is 6-8 weeks ARO.

Leveraging over 20 years of innovative standard products, the Pixus team is comprised of industry experts in electronics packaging. Founded in 2009 by senior management from Kaparel Corporation, a Rittal company, Pixus Technologies' embedded backplanes and systems are focused primarily on  ATCA, OpenVPX, PCIe and custom designs.    Pixus also has an extensive library of VME-based and cPCI-based solutions.   In May 2011, Pixus Technologies became the exclusive North and South American supplier of the electronic packaging products previously offered by Kaparel Corporation and Rittal.

Pixus Technologies is actively involved in the continuous development of leading AdvancedTCA, OpenVPX, and cPCI/PCIe products that will surpass all data transfer and cooling challenges.
Share