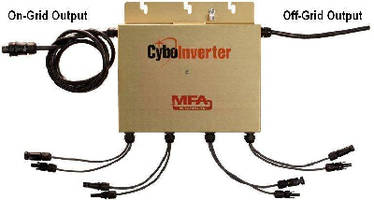 CyboEnergy, Inc. (Rancho Cordova, CA), the developer of the world's first solar power Mini-Inverter that possesses the key merits of both central inverters and microinverters, announced today that the company has released an On/Off-Grid CyboInverter that can operate in either on-grid or off-grid mode, switching between the two modes automatically, and can also run an electric water heater in the off-grid mode.

CyboEnergy CEO, Dr. George Cheng said, "The On/Off-Grid CyboInverter has received a lot of traction and excitement since we released the product last June. This special On/Off-Grid CyboInverter offers our customers the capability to power an electric water heater or a baseboard heater in its off-grid mode using solar power and can also send the power to the grid in its on-grid mode. This shows our creativity and commitment to offer unique products to address market needs."

As shown in the following diagram, a daisy-chained On/Off-Grid CyboInverter A/H model twin pack is connected with 8 solar panels. There are no batteries in the system to save cost. The system can be set up to power an electric water heater as the primary goal in the off-grid mode. When the hot water reaches its temperature setpoint, the inverters will switch automatically to the on-grid mode to supply solar power to the grid. The system can also be set up to run in the on-grid mode all the time while the grid is up. When the grid is down, it can keep the electric water heater running in the off-grid mode.

The following graphic shows a 4-channel 1.2KW On/Off-Grid CyboInverter that has an on-grid AC output port and an off-grid AC output port. Each inverter has four input channels that can connect to four 300W DC sources including solar panels, wind generators, or batteries and produce 1150W AC peak power. Each input channel has its own control and MPPT to eliminate solar partial shading problems and maximize power production. The product is patented, UL1741 certified, NEMA 6 rated, and made in the USA. Based on the AC standards, four popular On/Off-Grid CyboInverter models are listed in the table below.

About CyboEnergy and CyboSoft
CyboEnergy is a subsidiary of CyboSoft, focusing on development, manufacturing, marketing, and services of product lines in the renewable energy field. CyboEnergy received the Frost & Sullivan's 2013 Global Product Differentiation Excellence Award for Solar Inverters. Founded in 1994, CyboSoft is the leader in control technology serving the worldwide process control, building control, and equipment control markets. CyboSoft’s patented Model-Free Adaptive (MFA) control technology for automatically controlling physical processes is a major breakthrough. No other comparable technology possesses all the attributes of MFA.