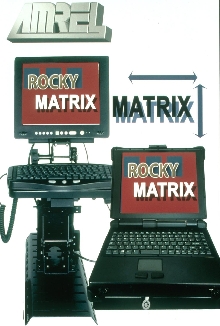 January 15, 2002 - AMREL SYSTEMS LLC, a division of AMREL Corporation, announced today the availability of their new ROCKY Matrix rugged computing system that was developed in response to customer demand for a solution with the ability to meet both in-vehicle and field use computing needs. The ROCKY Matrix is the FIRST all-in-one solution to combine a fully rugged notebook computer with an in-vehicle computing station (consisting of an AMREL Alpha-Star SRL touchscreen Display Unit, an independent 89-key backlit keyboard, and a customized vehicle docking station).

Utilizing AMREL's DVI technology for component-to-component communication, when docked and in stationary operation, the Matrix functions as a three-piece computer with the notebook acting as the system unit. Each component of the ROCKY Matrix is fully rugged: the Matrix's notebook has been independently certified to both MIL-STD 810F and IP-54 industrial standards; the Matrix's Display Unit has been certified to IP52 and the independent keyboard carrys the IP-54 certification.

The ROCKY Matrix notebook can be used either independently of or in conjunction with the computing station's Display Unit and independent keyboard. Equipped with its own 89-key BackLit keyboard the Matrix notebook is wireless-capable and features an Intel SpeedStep CPU, an internal Mini PCI slot, and two Type II or one Type III PCMCIA slots. The ROCKY Matrix notebook also incorporates AMREL's "Advanced Modular Platform," which allows for easy system upgrades, integration and field servicing. The system supports a complement of options, including: a removable HDD, and a "Smart Bay" that operates any of the following interchangeable components: CD-ROM, DVD, FDD, 120MB Super Disk Drive, or Secondary Battery.