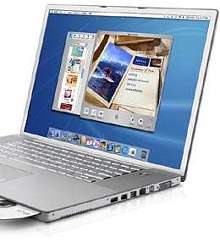 "Apple's taking another giant leap beyond PC notebooks with the world's first 17-inch notebook, miraculously engineered into an ultra-light aluminum alloy enclosure that's only 1-inch thin," said Steve Jobs, Apple's CEO. "Many users are going to wonder why they even need a desktop computer anymore."

The 17-inch PowerBook delivers the screen space and performance previously found only in desktop computer systems. The new PowerBook's stunning 17-inch screen displays 1440-by-900 super-crisp pixels in a widescreen 16:10 aspect ratio. The 17-inch PowerBook is the most powerful Apple portable ever with a 1 GHz PowerPC G4 processor, new high-speed architecture, fast NVIDIA graphics and a slot-loading SuperDrive(TM) for playing and burning CDs and DVDs. Housed in a lightweight and durable aluminum alloy enclosure just 1-inch thin and weighing only 6.8 pounds, the new 17-inch PowerBook G4 model is the thinnest Apple notebook ever, and lighter than most competitors' 15-inch and 16-inch notebooks.

The 17-inch PowerBook G4 includes the world's first fiber-optic backlit keyboard, as well as ambient light sensors that control the brightness of the display and automatically regulate the keyboard backlighting. In low light, the 17-inch PowerBook G4 automatically illuminates the backlit keyboard and lowers the display brightness, reducing eye strain and extending battery life. As light levels increase, the display brightness is re-adjusted automatically and the keyboard backlighting is turned off. This truly integrated display and lighting solution is an industry first, and will be warmly greeted by professionals who spend long hours in front of computer screens in low light conditions.

The 17-inch PowerBook G4 is the most wirelessly connected notebook ever, with both AirPort Extreme and Bluetooth wireless networking built in. AirPort Extreme is based on the new 802.11g standard and transmits data wirelessly at up to 54 Mbps-almost five times the data rate of previous wireless technologies-yet is fully compatible with the millions of 802.11b devices in use around the world. Built-in Bluetooth provides wireless connections to Bluetooth-enabled peripherals such as cell phones and PDAs. Apple's new iSync software is included, so customers can automatically synchronize address books and calendars between Macs and Bluetooth capable cell phones.

The new 17-inch PowerBook G4 includes a full complement of I/O ports, including two powered FireWire ports, one FireWire 400 port and one FireWire 800 port so customers can quickly transfer uncompressed digital video to high-capacity storage devices. And, it continues to be the only notebook to offer built-in Gigabit Ethernet (10/100/1000BASE-T).

Pre-installed on every 17-inch PowerBook G4, "Jaguar" enhances the mobile experience with unique features including Instant On, which wakes the PowerBook from sleep in just one second; Automatic Networking, which automatically switches the network connections between Ethernet, 802.11 and modem; and advanced power management through Energy Saver Profiles for industry-leading battery life. Every new PowerBook G4 includes Apple's iLife(TM) applications, an integrated suite of award-winning software including iTunes(TM) 3 for managing digital music, iPhoto(TM) 2 for organizing and sharing digital photos, iMovie(TM) 3 for digital movie-making, and iDVD(TM) 3 for creating and burning Hollywood-style DVDs.

Pricing & Availability
The new 17-inch PowerBook G4 is expected to be available in February through the Apple Store® (www.apple.com), at Apple's retail stores and Apple Authorized Resellers for a suggested retail price of $3,299 (US).

Additional build-to-order options for the new PowerBook G4 include the ability to upgrade to up to 1GB of DDR RAM. AirPort Extreme Base Station and the AppleCare® Protection Plan are also available for the new 17-inch PowerBook G4 for an additional price.

*Weight includes battery and SuperDrive, and varies by configuration and manufacturing process.
**Wireless Internet access requires an AirPort Card, AirPort Base station and Internet access (fees may apply). Some ISPs are not currently compatible with AirPort.
***Based on 9 commonly used actions in Adobe Photoshop 7.0.