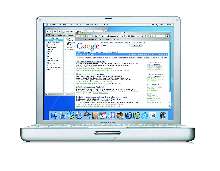 Apple Introduces Its Smallest Notebook Ever

"The new 12-inch PowerBook G4 is a jewel," said Steve Jobs, Apple's CEO. "It's the smallest and most affordable PowerBook Apple has ever created and the most compact full-featured 12-inch notebook in the world."

The new 12-inch PowerBook G4 includes built-in Bluetooth for wireless connections to Bluetooth-enabled peripherals such as cell phones and PDAs. Apple's new iSync software is also included, so customers can automatically synchronize address books and calendars between Macs and Bluetooth devices. The new 12-inch PowerBook G4 also includes built-in antennas and a card slot to support AirPort® Extreme, Apple's next-generation wireless networking based on 802.11g**. 802.11g can transmit data at up to 54 Mbps, almost five times the data rate of previous wireless technologies, yet is fully compatible with the millions of 802.11b Wi-Fi devices currently used around the world.

Pre-installed on every 12-inch PowerBook G4, Apple's Mac® OS X version 10.2 "Jaguar" enhances the mobile experience with unique features including Instant On, which wakes the PowerBook from sleep in just one second; Automatic Networking, which automatically senses the active network port and switches the network connections between Ethernet, 802.11 and modem; and advanced power management through Energy Saver Profiles for industry-leading battery life of up to five hours on a single charge. Every new PowerBook G4 includes Apple's iLife(TM) applications, an integrated suite of award-winning software including iTunes(TM) 3 for managing digital music, iPhoto(TM) 2 for organizing and sharing digital photos, iMovie(TM) 3 for digital movie-making, and iDVD(TM) 3*** for creating and burning Hollywood-style DVDs.

Pricing & Availability
The new 12-inch PowerBook G4 is expected to be available later this month through the Apple Store® (www.apple.com), at Apple's retail stores and Apple Authorized Resellers for a suggested retail price of $1,799 (US).

Additional build-to-order options for the new 12-inch PowerBook G4 include: up to 640MB of DDR RAM; the SuperDrive (DVD-R/CR-RW) optical drive; the AirPort Extreme Base Station and AirPort Extreme Card; and the AppleCare® Protection Plan.

* Weight includes battery and Combo drive, and varies by configuration and manufacturing process.

***iDVD 3 included only with optical SuperDrive.