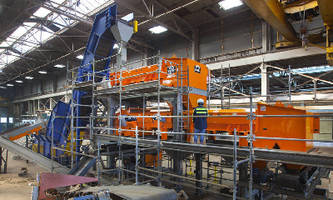 The RCS should be the first nonferrous separator in the scrap yard.  It is positioned downstream of ferrous separation (Scrap Drums / Magnetic Head Pulleys) and typically a Trommel Screen to size the material prior to reaching the Eddy Current Separators.  Downstream of the RCS system, Sensor Sorting Equipment may be used to separate stainless and lead.

The RCS circuit was derived from mineral processing techniques that are widely used for the same goal: maximize the grade and recovery of zorba.  The RCS system can generate an additional $500,000 in revenue for a typical scrap yard in its first year of operation.

Tim Shuttleworth, Eriez President and CEO, explains, “The RCS System was developed in response to China’s operation ‘Green Fence’–China’s initiative to inspect scrap imports and keep out undesirable materials.   As part of the Green Fence initiative, China is requiring imported zorba to be of a very high grade.” He continues, “Many Chinese buyers have stopped purchasing lower-grade zorba all together.  The zorba market is now flooded with low quality material.  The RCS will allow its users to sell a premium high-grade zorba which will be sought not only by the Chinese, but by other countries around the world.”

The RCS system is appropriate for both new installations and as an add-on to existing operations.  Mike Shattuck, Eriez Market Manager-Metals Recycling, explains, “Any operation that has an existing Eriez Eddy Current Separator could buy two additional (Eriez) Eddy Current Separators and align them in the RCS circuit to achieve these same high grades and recoveries.  Eriez and our partners are happy to assist with any redesign of existing nonferrous downstream to accommodate the RCS system.”

The performance of the Eriez RCS System was proven in full-scale testing conducted by Virginia Polytechnic Institute and State University (Virginia Tech). Testing showed that an Eriez RSC System would increase zorba output by 116 percent over a single-stage Eddy Current Separator unit. Assuming a fair market zorba price of $1.50 per kg ($0.68 per lb), and assuming that both systems are run for 40 hours a week for 50 weeks a year, the 116 percent increase in output for the Eriez RSC machine equates to an additional $1.7 million in annual revenue or about 1,250 tons of zorba.

According to Eriez, the first commercial RCS application is being built now for a spring 2015 start-up and will be open to the public. To learn more about the Eriez RCS System, call toll-free (888) 300-ERIEZ (3743) and ask to speak with a recycling industry specialist. To view product information online, visit http://ow.ly/MDSR8. To watch a video highlighting the RCS System, go to http://ow.ly/MDSYo.