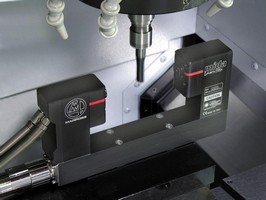 Available with collimated or focused laser beam, Mida Laser 75P has programmable feature that enables system to be adapted to tool type under verification, to same rotation speed used during machining, and to desired measuring cycle. Shutter design protects laser system from contamination through tunnel air effect technology, which permits unit to measure and verify dimension, tool breakage, and wear in presence of coolant. Other features include parallel I/O and RS232 serial port.


May 14, 2008, Auburn Hills, MI - Marposs Corp. will introduce its new Mida Laser 75P non-contact programmable tool setting system at IMTS 2008 in booth D-4514, September 8-13, in Chicago's McCormick Place. The programmable feature of the high performance, extremely robust Mida Laser 75P unit enables the system to be adapted to the tool type under verification, to the same rotation speed as used during machining and to the desired measuring cycle.

The new Mida Laser 75P incorporates an innovative shutter design that protects the laser system from contamination through a tunnel air effect technology. This design permits the unit to measure and verify dimension, tool breakage and wear in the presence of coolant. A microprocessor, integrated into the unit's electronic interface, elaborates the signal received, filtering noise coming from coolant and chips.

The Mida Laser 75P system is available with a "collimated" or "focused" laser beam. The focused model is essential for cutting edge integrity verification and length measurements of chisel or rounded nose tools, or for tools with a diameter of less than 1 mm.

In addition to the system's standard parallel I/O, the Mida Laser 75P incorporates an RS232 serial communication port that allows the exchange of data during the measuring cycle to improve accuracy and repeatability results in worst conditions, easier retrofitting without any M-code, and to facilitate correct installation check and troubleshooting.

Complete information on the new Mida Laser 75P programmable tool setting system can be found at the company's web site www.marposs.com, by calling toll-free 1-888-627-7677 or by e-mail to marposs@us.marposs.com
Share