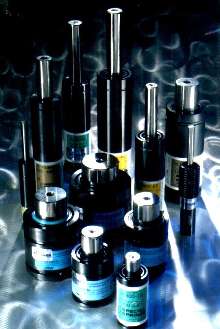 The Moeller nitrogen cylinder line with five model ranges is said to provide up to 50% longer life and 30% more force than competitive types due to a combination of valuable design features. A single-piece nitrided rod lapped to less than .05 microns, long-life polyurethane rod seals, self-lubricating guide elements, a machined solid body and an advanced composite rod wiper which prevents interior contamination allow Moeller
nitrogen gas springs to carry a guarantee of the longest gas spring service life in the industry in any recommended application.

The models include the MCS/NE minicylinders (including threaded body designs), ISO standard SC series, the higher force ISO style H series, HR series for higher force in a shorter profile, and the compact K series for maximum loading pressure. Body OD range from 0.75" to nearly 6" (19mm-150mm). Force ranges from 40 psi to over 61000 psi, nominal initial force. No preloading is required. Moeller Special Springs deliver more force in a smaller profile than competitive units, reducing the number of cylinders required for any application and making it easier to apply force to exact position needed.

Fully interchangeable, the Moeller cylinders may be applied as self-contained or in hosed systems. Force in any Moeller application is maintained due to the superior construction features of the cylinders. This assures consistent part production quality and longer life for tools and punches.

According to customer reports, Moeller MCS minicylinders hold up better because their seals last longer. "We are getting about 50% more hits," says Mike Blaszczak, tool room supervisor at Logghe Stamping, a Michigan company and automotive supplier. The
Moeller MCS series is one of only a few nitrogen springs approved for use in General Motors stamping dies.

"Self-contained minicylinders from any vendor are supposed to be good for about million cycles, but the high-quality oil-based fluid we use in the press destroys seals, and caused the other minicylinders to lose pressure and fail, resulting in expensive press downtime and tooling repair," he said. "On just two cylinder sizes we installed, we saved $15,000 with Moeller compared to another brand nitrogen cylinder we had been using."

Since 1965, Moeller Manufacturing, an ISO 9001/2000 certified company, has been a leading provider of value-engineered stamping die details and tooling including nitrogen cylinders and custom-made special details. For more on the company, see www.moeller.com.
Share