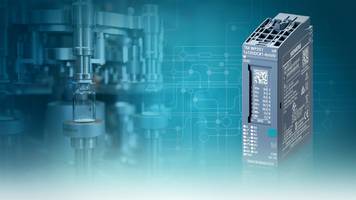 Siwarex WP351 is Siemens’ newest solution for intelligent weighing automation. Measuring 20 millimeters width by 65 millimeters height, the module is one of the smallest weighing electronics units available. The device’s 1,000 Hz sampling rate and processing time combined with a digital output response time of less than one millisecond guarantee highest accuracy and repeatability. This capability represents especially in case of checking scales and high performance filling machines a big advantage, as even within very short weighing times the dosing devices are controlled in an optimal way.

As an integral part of Simatic ET 200SP, Siwarex WP351 can be seamlessly integrated into Simatic and non-Simatic automation systems, making it a clever alternative to traditional weighing terminals. The intelligent firmware gives users the ability to control weighing processes directly from the module, thereby reducing the load on the connected PLC.

Through the ethernet-connected web server, users can quickly commission and maintain the device - or gain emergency access to the scale in case of a failed or disrupted PLC. Seamless connectivity coupled with device status transparency and full access to all scale data ensures fast servicing that minimizes downtimes.

Compatible with almost all analog strain gauge load cells, Siwarex WP351 is a versatile solution for demanding weighing applications such as mixing, filling, bagging, checking, or totalizing. Due to all available certificates also in legal-for-trade operation according OIML R-51, R-61, R-76 or R-107.

This press release and a press picture are available at www.sie.ag/2ulMM9H