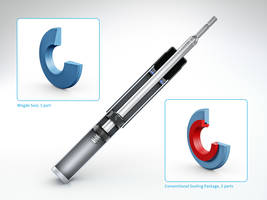 Weinheim (Germany), October 29, 2019. Shock absorbers ensure that a car’s wheels stay on the road, making them a key safety element in any model. A new design concept from Freudenberg Sealing Technologies simplifies the installation of the seal between the housing and the piston rod inside the absorber. The wedge-shaped seal also reduces friction, leading to less wear.

If a vehicle drives over a pothole or speed bump, shock absorbers transform the kinetic energy in the suspension into friction and dissipate it as heat. Today the typical hydraulic shock absorber has a piston that moves through an oil-filled housing. In terms of their designs, there is a significant difference between the simpler two-tube and the more complex single-tube technologies used in shock absorbers. The latter option offers greater damping performance, better heat dissipation and the opportunity for more precise adjustment. The single-tube technology is especially found in premium vehicles, sports cars and SUVs, as well as in snowmobiles and motorcycles.

Since the 1970s, a two-part system has emerged for the upper piston rod seal in one-tube shock absorbers. An acrylonitrile butadiene rubber (NBR) ring, connected to the housing, keeps a dynamic seal made of fluoro rubber in place. Three seal lips seal the piston rod. The retaining ring applies the required pressure on the lips, continually pushing against the seal’s outer edge and compressing it in the process. Automotive supplier Freudenberg Sealing Technologies manufactures more than 27 million seals of this type annually.

Engineers at Freudenberg Sealing Technologies have now developed an alternative sealing concept for one-tube shock absorbers: a wedge seal. The wedge-shaped design leads to a highly simplified seal structure since it makes the retaining ring used in conventional two-part systems unnecessary. The design makes logistics and installation easier during the absorber manufacturing process because fewer components need to be stocked, assembled and joined together.

“The more precise distribution of contact pressure reduces the friction between the seal and the piston rod by up to 5 percent,” said Simon Watling, Manager Advanced Development in the Damper and Steering Division at Freudenberg Sealing Technologies.

As the feedback from customer tests shows, shock absorbers with the new sealing system respond very sensitively to bumps and other stimuli, which improves the vehicle’s handling. In other performance metrics, wedge seals work as well or even better than conventional seals. For example, the engineers were able to lower the sealing system’s range of operational temperature by an extra 2 to 4°C.

Freudenberg Sealing Technologies continues to use FKM as the primary material of choice in these new seals. The seal’s unique top-facing conical contour design supports the component at the housing and appears wedge shaped in cross-section. Additionally, the wedge seal introduces a new level of industry innovation in the way it seals against the piston rod: In the new system, the oil pressure builds up on the seal lips inside the shock absorber. The high hydraulic pressure – which ranges from about 30 bar at rest to more than 150 bar under dynamic stress – leads to an elastic deformation of the seal, which in turn produces an elongation of the seal lips. They press against the piston rod, sealing it.

“To achieve this effect, we produce the required force distribution inside the seal with a special design of the seal’s and rod guide geometry,” Watling said.

Here the crucial factors are the sequence in the deformation of the three seal lips – and the amount of force involved. First, the lower seal lip has to control the oil film thickness to prevent leakage and maximize unit life. The other two seal lips follow at higher pressure, helping to reduce unit friction while maintaining the sealing effect. When the pressure in the shock absorber exceeds 50 bar, the maximum sealing effect is achieved, and the contact pressure of the three seal lips is approximately the same.

Freudenberg Sealing Technologies uses a novel virtual development process to create seal concepts, select different sealing materials and apply a seal to a particular application. The process involves finite element simulation methods tightly meshed with other computing processes. Watling explains: “We can develop new seals extremely quickly and efficiently, without having to produce prototype components.” Once the simulations are successfully completed, the engineers produce test samples for test stand trials to verify the results of the calculations.

The new wedge seal system has passed its trial by fire and is in use in series production at a well-known automaker. In parallel, the company is continuing to develop its conventional two-part seal design. Its focus is largely on new polymer materials that further expand the seal’s range of operating temperatures.