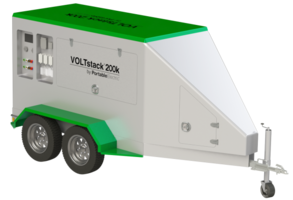 The VOLTstack® 200k will deliver up to 200kW of power, with a 250kW surge, from a massive 400kWh of battery storage – all on a highly mobile platform.

"This level of power represents large-scale change in the global film industry," said Mark Rabin, founder and CEO of PE. "We are building the most robust, mobile and powerful battery power station the world has ever seen. It will be strong, yet silent, and able to replace tow plants and generators, while integrating seamlessly with existing VOLTstack® products in the field today."

The VOLTstack® 200k is the next natural step in the line of VOLTstack® products that add versatility and efficiency to the film industry. Its 2k, 5k and 20k models have been used by some of the world's largest film productions and sold to production companies, such as NBC Universal and Warner Bros., as well as rental companies like Cinelease and Sim International.

"The VOLTstack is one of the most positive steps forward in movie sound in recent years. Since the first film with sound, the noise of diesel generators has created problems," said industry veteran Simon Hayes, known for his Oscar and BAFTA-winning work on "Les Misérables", "Fantastic Beasts" and the latest "Bond 25". "The VOLTstack is silent, meaning generators can be close to set, helping you hear the actor's original performance. All this while reducing harmful emissions. The VOLTstack is a win-win."

Out-competing today's large diesel generators, this state-of-the-art battery system will ensure the industry can address the growing drive towards sustainability, while simultaneously cutting costs through higher efficiency and minimal maintenance. For the first time the industry will be able to use battery electricity for EV charging; all forms of trailers and power for extensive lighting; cranes and cameras as a result of the VOLTstack® 200k's completely silent operation, high power output and battery capacity.

The VOLTstack® 200k will be a 'smart' product, making on set power management simple and efficient through real-time diagnostics, GPS location tracking and data accessible through the app. The VOLTstack® 200k will seamlessly integrate with the already existing VOLTstack® ecosystem of products owned by lighting technicians and production houses across the world. It will enable fast-charging for the VOLTstack 2k, 5k and 20k units, ensuring continued, reliable clean energy on set.