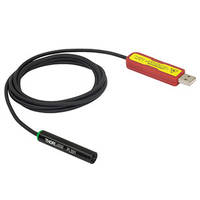 Newton, NJ – November 5, 2019 – Thorlabs has announced the recent release of a new series of USB-powered pointer lasers for alignment and daily lab use. These plug-and-play lasers, which are available with peak output at 520 nm or 635 nm, can be powered by any USB power source present in the lab; this beneficial feature is enabled by an internal filter with high attenuation, which facilitates low optical noise performance without the need for an extra linear power supply.

"We are excited to introduce this new product series, which is fully designed, developed, and assembled by Thorlabs’ Munich-based team," noted Frank Albrecht, the Product Line Manager for Thorlabs' Pointer Lasers. "In the coming year, we are planning to expand this product series with additional wavelengths, higher output powers, and additional features."

For OEM and industrial customers, Thorlabs also offers these laser modules from stock without a USB connector, thereby facilitating integration into a system. A wide range of modifications are feasible, thereby allowing Thorlabs to manufacture customized versions of this product series in high quantities, with short lead times and calibration details included.

About Thorlabs: Thorlabs, a vertically integrated photonics products manufacturer, was founded in 1989 to serve the laser and electro-optics research market. As that market has spawned a multitude of technical innovations, Thorlabs has extended its core competencies in an effort to play an ever increasing role serving the Photonics Industry at the research end, as well as the industrial, life science, medical, and defense segments. The organization’s highly integrated and diverse manufacturing assets include semiconductor fabrication of Fabry-Perot, DFB, and VCSEL lasers; fiber towers for drawing both silica and fluoride glass optical fibers; MBE/MOCVD epitaxial wafer growth reactors; extensive glass and metal fabrication facilities; advanced thin film deposition capabilities; and optomechanical and optoelectronic shops.