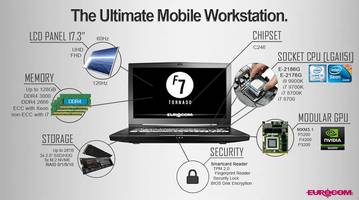 Eurocom is making waves in the high-performance laptop market with its announcement of 4 TB M.2 Sabrent Rocket NVMe SSD storage now available in their already impressive line of laptops. With this announcement, Eurocom has set the world record for the largest internal storage in a laptop by offering up to an incredible 28 TB of SSD storage space using 5 physical drives.

But who needs this massive power? Power users who work with incredible amounts of data and cannot risk any errors when it comes to their critical data being transferred and stored can all benefit largely from NVMe SSDs. These power users include, but are not limited to: IT professionals who work in Computer Aided Design (CAD), IT Architects who work with programs such as SOLIDWORKS, software designers/engineers who want to reduce their transfer and render times, professional gamers who want to fully-optimize their computing experience, and many more. If a user is working with a large amount of data, an NVMe SSD is the solution for those looking to greatly improve transfer/render times while considerably reducing the risk of losing important data.

Besides blazing-fast storage, Eurocom continues to set the trend in laptop performance and customization by giving users the ability to configure their laptops with up to 128 GB RAM along with a wide choice of today’s most powerful CPU and GPU hardware. The result? Eurocom’s heavy-duty users can a dream system with unmatched power on-the-go! One of the systems that fully support 28 TB of SSD storage is the Tornado F7W Mobile Workstation

The Tornado TF7W is capable of supporting up to 5 physical drives with a total space up to an astonishing 28TB of internal SSD storage. It has 3 x M.2 NVMe slots and 2 x 2.5” SATA3 slots that can run in multiple RAID configurations (RAID 0/1/5/10). It is capable RAID 0/1/5 configuration with NVMe SSD’s. This RAID feature is uncommon in most of the high-end laptops in the market today and is one of the many different ways Eurocom laptops give power users the unique tools and customization they need to perform complex tasks and processes.

This system has a 17.3-inch display size, is 51mm (2.04 inches) in thickness and weighs 4.14kg (9.1 lbs). It supports a selection of workstation-class GPU’s including the Quadro P5200, P4200 and P3200. The GPU’s are upgradeable via MXM 3.1, socket-based technology and the size of each card is 82mm x 105mm. Eurocom also offers a several-choices of processors ranging from i9 900K, i7 9700K-which are 8-core CPU’s, as well as Xeon 6Core/12Thread E-2816G CPUs. These processors are LGA 1151 socket-based, allowing for future upgrades to next-generation processors once they are available.

The Tornado F7W comes loaded with security features critical to the management of intellectual properties stored within different companies and organizations. It is equipped with a Smart Card reader and a fingerprint scanner for security access as well as TPM 2.0 and BIOS disk encryption for further data security. Eurocom also offers and optional, “anti-hacking protection suite,” consisting of the removal of webcam, microphone and wireless cards. This allows for protection of intellectual assets and further defends against malware, tampering and theft of intellectual assets and/or data.