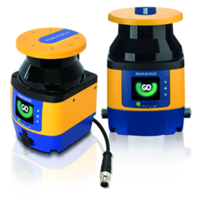 After the recent launch of SLS-SA5, the stand alone model, a complete application-oriented solution based on the safe monitoring of a two-dimensional area including all functions needed for static horizontal and vertical applications (such as robot cells, machine perimeter protection, machine opening protections, etc.) as well as dynamic applications (simple automated guided carts and forklifts), Datalogic takes a further step forward to ensure complete safety in all environments, introducing the Master and Slave models of laser scanners.

Operating with the Master and Slave models allows the connection of up to 4 Laser Sentinel units one to each other, through Ethernet-based safe communication buses. The Slaves are connected to the Master with a single cable that also provides them with power. The synchronization of the four scanners is a seamless integrated function; there is no need for external control units.

The complete system can be powered up, connected to the rest of the safety control system, programmed and monitored through the Master, while Safety and Warning zones can be split over the Master and Slaves. During the operation, the zone set changes of the Master are safely and seamlessly synchronized with the zone set changes of the Slaves.
Laser Sentinel also measures the distance of the objects around it, and the data, sent over the Ethernet port, can be used by a vehicle control system for direct navigation or by a machine in order to check the correctness of the production process.

The SLS-M5 (Master) and SLS-R5 (Slave) models can be configured to mute their safety function (Muting). Muting activation is done by muting sensors which are triggered by the approaching material that will be entering or exiting the unsafe area.

The Override function allows the user to force the OSSDs to “ON state” whenever it is necessary to restart the machine, starting from a “OFF status” of the Safety Laser Scanner ( detection of an object), and when one muting sensor is active.

By choosing the Datalogic Safety Laser Scanners family, the benefits for the customers are: saving of wires, saving of safety module or safety inputs on PLC, saving of work for installation, simplified maintenance. To these effective benefits that increase productivity, add the security of knowing that behind these safety systems there is Datalogic's experience and technology.

Like any other safety product designed and produced by Datalogic, LASER SENTINEL has been certified according to the most recent safety standard.

Datalogic is a global leader in the automatic data capture and process automation markets, specialized in the designing and production of bar code readers, mobile computers, sensors for detection, measurement and safety, RFID vision and laser marking systems. Datalogic solutions help to increase the efficiency and quality of processes in the Retail, Manufacturing, Transportation & Logistics and Healthcare industries, along the entire value chain.

The world's leading players in the four reference industries use Datalogic products, certain of the attention to the customer and of the quality of the products that the Group has been offering for 47 years.

Today Datalogic Group, headquartered in Bologna (Italy), employs approximately 3,100 staff worldwide, distributed in 30 countries, with manufacturing and repair facilities in the USA, Brazil, Italy, Slovakia, Hungary and Vietnam. In 2017 Datalogic had a turnover of 606 million Euro and invested over 55 million Euros in Research & Development, with an asset of more than 1,200 patents in multiple jurisdictions.

Datalogic S.p.A. is listed in the STAR segment of the Italian Stock Exchange since 2001 as DAL.MI. More information about Datalogic at http://www.datalogic.com.

Datalogic and the Datalogic logo are registered trademarks of Datalogic S.p.A. in many countries, including the U.S.A. and the E.U.