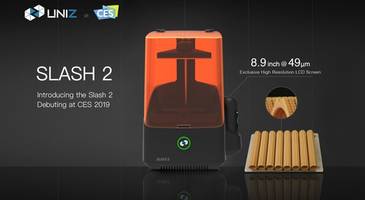 The SLASH2 3D Printer is offered in 192 mm x 120 mm build size with a resolution of 49um. The product features a specially designed 8.9 in. LCD screen. The printer’s volume is 3 times larger than standard printer that enables it to handle variety of tasks and industry purposes. It is suitable for applications in dental, jewelry and custom manufacturing.

SLASH2 - The Newest High Precision 3D Printer From UNIZ Tech will be Debuted in CES Exhibition!

On January 8th, 2019 at CES 2019, UNIZ Technology unveiled the newest in the line of extremely fast, ultra high precision 3D printers—The Slash 2. The California based company boasted a 192mm x 120mm build size and 49um resolution for its new product. The new model garnered a large amount of attention from the trade show with its impressive display of quality and promise.

The Slash 2 is distinguished from other 3D printers of its type by its impressive specially designed 8.9” LCD screen. A larger, high resolution screen opens up a large array of new possibilities for SLA-LCD 3D printing, which was previously hindered by the physical size of smaller screens. The Slash 2’s build volume is up to 3 times larger than that of other printers, which also allows the printer to handle a wider variety of tasks and industry purposes. Sample models rendered by the Slash 2 were shown at CES 2019, and they demonstrated its exquisite surface quality as well as its ability print many objects simultaneously. The Slash 2 is perfect for its applications in dental, jewelry and custom manufacturing, in which quality, speed and build size are all required without trade-off.

As with other UNIZ products, the Slash 2 comes equipped with the trademark cUDP technology, which broke record 3D print speeds of up to 1200mm/hr. In contrast with the industry standard of 50mm/hr from other 3D printers, the Slash series is figures faster than others in the industry and holds the title of the world’s fastest desktop SLA printer.

The Slash 2 boasts great advantages in terms of printing speed, build size and precision. It enables more industries and businesses to apply 3D printing in order to solve advanced technical problems, reduce costs, and simplify workflows. The Slash 2 will spearhead the 3D printing industry by bringing in a new standard in 2019.

UNIZ Technology LLC is a leading global innovator of desktop and industrial SLA 3D printing technology. The company was established in San Diego, California in 2014 by founder and CEO Dr. Houmin Li. UNIZ is committed to producing bigger, better and faster 3D printers to the benefit of all peoples and businesses.