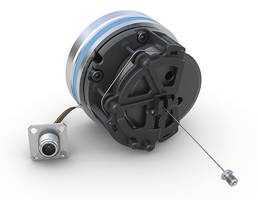 SGH25 Wire-Actuated Encoder is offered with analog interfaces and with CANopen or SAE J1939 protocols. Unit provides a measurement range of up to 2.5 m and is suitable for applications such as dumper trucks, excavators and agricultural machinery. SGH series encoders are resistant to shock and vibration and feature teach-in function that allows to set up the sensor's measurement length individually.

SGH25 - Wire-Actuated Encoder as Integrated Position Sensor for Hydraulic Cylinders up to 2.5m

The new SGH25 wire-actuated encoder from SIKO is characterized by a measurement range up to 2.5m and an extremely long service life. The variety of interfaces meets the very highest requirements, even in applications that are critical for safety. With this performance profile, the wire-based position sensor is suitable for applications in mobile machines such as dumper trucks, excavators and agricultural machinery, where it measures the position of hydraulic and telescopic cylinders and communicates it to the machine control system via integrated communication protocols.

In comparison to the SGH10 basic model with a measurement range of up to 1m, the SGH25 has an extended measurement range up to 2.5m, while its big brother, the SGH50, covers large measurement ranges up to 5m. The SGH series can be integrated directly into hydraulic cylinders. A newly developed plastic provides a strong design and extends the fluid temperature range from 85°C previously to 105°C now.

Robust in every respect

As far as shock and vibration resistance is concerned, SGH sensors set the standards. The SGH25 has been tested to the toughest vibration standards, which are otherwise used for helicopter drives, and easily withstands individual shocks of up to 100 times the force of gravity. Its flexible cable cushions the hardest impacts. The hydraulic medium also dampens any vibrations that come about.

With the integrated teach-in function, the measurement length of the sensor can be set individually. The SGH25 can cover a multitude of measurement lengths (0-2.5m). Both the number of variants and the stock requirements for any spare parts therefore fall. Another feature of the position sensor is a KV1H plug connection. This modular plug connection system has the high protection rating of IP69K.

The SGH25 was developed specially for extreme conditions in mobile hydraulics that are mainly used in agricultural machinery or construction machines. The resilience required for this has been designed and tested both electronically and mechanically for the service life of a cylinder.

The SGH25 is available with analog interfaces and with CANopen or SAE J1939 protocols for transmitting data between the SGH sensor and the machine control system. Redundant versions with CAT3, performance level D -PLd meet the highest requirements for safety-critical applications in accordance with EN13849. There is a choice with safety variants between a redundant or analog interface, redundant CANopen, redundant SAE J1939 or CANopen-safety.

Piston boring is a thing of the past

For cylinder manufacturers, the use of SGH position sensors offers large potential for savings, as the cable-based design concept makes hollow boring of the piston superfluous. The SGH wire-actuated encoder can also be installed in telescopic cylinders, which provides a significant competitive advantage in comparison to traditional measurement systems.