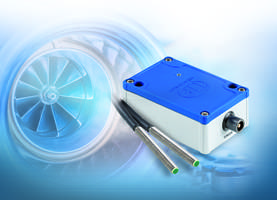 Reliable Measurement from The First Rotation

The capaNCDT CST6110 capacitive measuring system detects speed from the first rotation. This robust sensor system measures rotational speeds up to 400,000 rpm in drives, on rotor blades and position marks on shafts.

The new capaNCDT CST6110 measuring system measures rotational speeds of conductive materials such as metals and non-conductive materials such as ceramics or plastics. It consists of a compact industrial sensor combined with a robust controller. It is used as an innovative measuring system for industrial applications such as rotation speed monitoring of shafts, measurements in pumps and detection of rotational speed measurement in drilling applications. The measurements can be performed on blades, teeth, rings and nubs.

Fields of application extend from rotation speed monitoring on shafts with axial mounting and measurements in pumps to rotation speed of bore holes where radial installation is required. Rotational speeds are reliably detected from the first rotation up to 400,000 rpm.

Sensor data is output via voltage output or a digital interface. The design also enables integration into restricted installation spaces. Both axial and radial mounting are possible due to a space-saving M5 thread. Its high interference immunity makes the sensor ideally suited to electromagnetic radiation. 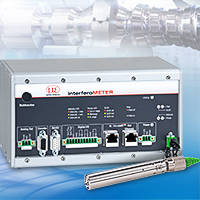