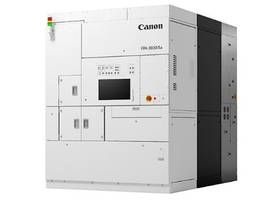 The FPA-3030i5a semiconductor lithography system, or stepper, is designed to process small substrates between 50 mm (2 inches) and 200 mm (8 inches) in diameter.  FPA-3030i5a steppers support not only silicon wafers, but also common compound semiconductor materials such as SiC (silicon carbide) and GaN (gallium nitride), which helps enable the manufacturing of various semiconductor devices that are expected to see increased demand in the future, such as high-power devices for automobile electrification and high-bandwidth video processing and communication devices for 5G communication.

FPA-3030i5a stepper hardware and software have been upgraded from its predecessor, the FPA-3030i5+ stepper (released in June 2012), to help reduce CoO*. The FPA-3030i5a inherits the imaging performance of the FPA-3030i5, achieving exposure resolution of 0.35 micrometer2 line width patterns while providing robust alignment options and increased productivity. The FPA-3030i5a employs a high-speed wafer feeding system that can be configured to handle a variety of wafer materials and sizes including compound semiconductors with a diameter from 50 mm to 200 mm.

Through the introduction of the FPA-3030i5a and implementation of advanced functions, system owners are able to manufacture specialty power and communication devices using a wide range of wafer materials including silicon and compound semiconductors such as SiC and GaN ranging in size from 50 mm to 200 mm.

FPA-3030i5a semiconductor lithography systems are expected to go on sale in early March 2021.

Canon U.S.A., Inc. is a leading provider of consumer, business-to-business, and industrial digital imaging solutions to the United States and to Latin America and the Caribbean markets. With approximately $33 billion in global revenue, its parent company, Canon Inc. (NYSE:CAJ), ranks third overall in U.S. patents granted in 2019† and was named one of Fortune Magazine's World's Most Admired Companies in 2020. Canon U.S.A. is dedicated to its Kyosei philosophy of social and environmental responsibility. To keep apprised of the latest news from Canon U.S.A., sign up for the Company's RSS news feed by visiting www.usa.canon.com/rss and follow us on Twitter @CanonUSA.

A semiconductor lithography system that utilizes a 365 nm wavelength mercury lamp as the light source. 1 nm (nanometer) is 1 billionth of a meter.

According to Canon research and public third party data, as well as industry information as of June 22nd, 2020.

Based on weekly patent counts issued by United States Patent and Trademark Office.

Availability and specifications are subject to change without notice.