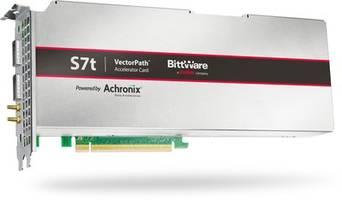 The VectorPath accelerator card was designed for high-performance and high-bandwidth data applications and features the following hardware capabilities:

The VectorPath accelerator card includes a full suite of Achronix's ACE development tools along with BittWare's board management controller and developer toolkit which includes the API, PCIe drivers, diagnostic self-test and application example designs to enable a rapid out-of-the-box experience. Designed for prototyping as well as high-volume production applications, the VectorPath S7t-VG6 accelerator card provides designers the ability to process massive amounts of data not possible with previous generations of FPGAs.

"The VectorPath accelerator card provides a platform to rapidly develop AI/ML, networking and data acceleration applications using the new Speedster7t FPGA," said Robert Blake, president and CEO of Achronix Semiconductor. "We are thrilled to have partnered with BittWare, the market leader in FPGA-based PCIe cards. Their deep expertise in design, manufacturing and support of FPGA-based PCIe cards and solutions gives our customers a world class platform to accelerate their development and deployment of an exciting new range of computational tasks."

"BittWare has a long history of successfully developing and designing leading-edge technologies for high-performance applications," said Jeff Milrod, president of BittWare. "The partnership with Achronix leverages the strengths of BittWare and Achronix jointly so customers will have a tremendous out of the box experience and utilize the cutting-edge capabilities of the Speedster7t FPGA."

Announced earlier this year, the Speedster7t FPGA family delivers new levels of performance with adaptability for high-bandwidth data acceleration applications. It features a revolutionary 2D network-on-chip (NoC) with greater than 20 Tbps bandwidth capacity for moving data from the high-speed interfaces to and across the FPGA fabric. The 2D NoC alleviates data bottlenecks with 256-bit, unidirectional buses in each direction for a total of 512 Gbps for each NoC row and column. The primary interface for the NoC is industry-standard AXI channels. Initial software support for the Speedster7t AC7t1500 is available today in the ACE 8.0 design software. To learn more about the Speedster7t, visit https://www.achronix.com/product/speedster7t/

The VectorPath S7t-VG6 accelerator card will ship at the beginning of Q2 2020. Customers interested in early engagements should contact Achronix.