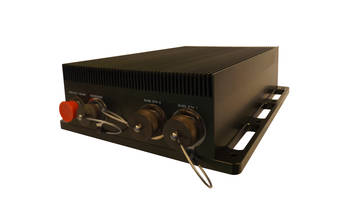 The RX310-X03 enclosure is designed to MIL-STD-810 for shock/vibration/environmental and MIL-STD-461 for EMI. It features MIL 38999 connectors for the front and rear I/O interfaces. The conduction-cooled enclosure is also IP67 weatherproof. The RX310-103 version contains two extended bandwidth daughterboard slots covering DC – 6 GHz with up to 120 MHz of baseband bandwidth, multiple high-speed interface options (PCIe, Dual 1/10 GigE), and a large user-programmable Kintex-7 FPGA.

Pixus also offers other ruggedized SDRs from NI, including it’s B, N, and E-series models. Light-rugged versions of the enclosures are also available upon request as well as specialty configurations.