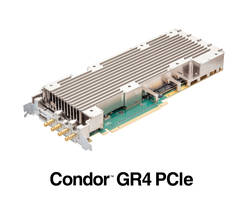 Altamonte Springs, Florida, July 21, 2020 – EIZO Rugged Solutions Inc., a provider of ruggedized graphics and video products, has released the industry’s first rugged PCI Express (PCIe) graphics/GPGPU card with four 3G-SDI inputs and outputs. The Condor GR4 PCIe card is designed for use in rugged rackmount servers and workstations and to be deployed in airborne and naval surveillance programs.

The Condor GR4 PCIe card is designed to host NVIDIA Pascal™ and Turing™-based MXM GPUs (graphics processing units), supporting PCI Express (PCIe) Gen 3.0 (16, 8, or 4 lane). The product currently has two variants, based on the NVIDIA GPUs — Quadro P5000 or Quadro P3000 – but also offers an upgrade path to the latest NVIDIA® Quadro RTX™ Turing GPUs. The maximum power consumption ranges from 85 W to 110 W depending upon the variant. The Condor GR4 PCIe is built and tested to withstand extreme temperatures, shock, and vibration for surviving in harsh environments as per MIL-STD-810.

Selwyn L. Henriques, president and CEO of EIZO Rugged Solutions, said: “The Condor GR4 PCIe meets the needs of both manned and unmanned ISR platforms, where high definition video must be captured, processed, displayed, encoded, recorded and/or transmitted to base stations, all with exceptionally low latency and high accuracy.”

“With 3G-SDI fast becoming the output of choice for developers of sensor pods and large gimbals featuring short wave, infrared, thermal, and optical cameras, we expect this one-card solution to tick all the boxes for our customers,” said Mr. Henriques. “The GR4 PCIe delivers exceptional MTBF (mean time between failure) performance – aided by passive cooling and fanless design – and its inherent modularity allows for GPU performance upgrades in the future. That’s why this product has already been specified on several airborne platforms.”

EIZO Rugged Solutions offers flexibility and responsiveness to customer requirements through the customizability of its products. The Condor GR4 PCIe can be customized for other IO configurations, video formats, or form factors.

For more information on the Condor GR4 PCIe card or any other product from EIZO Rugged Solutions, please visit www.eizorugged.com, email condor@eizo.com or call +1 (407) 262-7100.