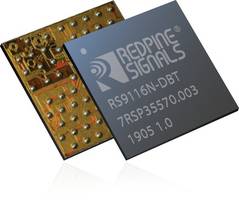 "As the IoT pervades the home, office, healthcare centre, hotel, and school, the availability of a viable wireless network has become increasingly important. Traditional ways of delivering wireless connectivity such as separate Wi-Fi links and a ZigBee mesh are no longer sufficient," said Venkat Mattela, CEO of Redpine Signals. "An application independent low power mesh running on standard IP protocol, along with nodes independently able to connect to the home Wi-Fi router has become imperative. We have created our RS9116N-DBT with all these capabilities and more, making it a unique chipset for the smart home."

Housed in a small 8.8 x 8 mm BGA package, the RS9116N-DBT integrates an ARM Cortex M4 MCU, advanced hardware security, and multiple wireless protocols at an industry-leading power consumption point. It fully contains protocol stacks for Wi-Fi, BT, BLE, ZigBee and Thread, and includes automated mesh formation and reconfiguration capability to provide robust, whole home coverage. It includes a unique wireless wake-up receiver that remains on at a few microamps of current and being ready to wake up the rest of the device only when required, triggered by specific incoming wireless signals.

Redpine's RS9116N-DBT consumes less than 113 uA for maintaining cloud connection over Wi-Fi, a power consumption of one-fifth to one-fifteenth that of other chipsets in the market. According to a Tolly Report earlier this year, in a battery operated smart device, the RS9116N-DBT can provide four years of battery life compared to roughly seven months when using an alternative SoC. The SoC provides simultaneous operation of multiple wireless protocols – thereby enabling router functionality in addition to that of an end node. This makes a device using this SoC capable of switching from being an end node to a router – providing maximum flexibility in a home and ensuring non-stop network coverage. In addition, the ability to stream data at up to 100 Mbps combined with its compatibility with all generations of Wi-Fi – up to Wi-Fi 6, enables the RS9116N-DBT to enhance the overall connectivity experience in the smart home of tomorrow.

With Artificial Intelligence becoming a prominent part of most smart systems, there is a strong need to have appliances and edge devices capable of carrying out analytics and inference of situations themselves. The RS9116N-DBT provides a number of power-efficient and hardware assisted ML functions to enable the next generation of smart applications while preserving low operational latency and low power consumption.

The RS9116N-DBT is in volume production now.

A smart-lock implemented with the RS9116N-DBT is being showcased at the Connections 2019 conference on May 21st – 23rd.