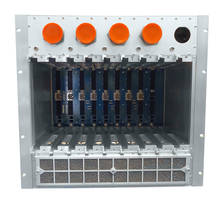 Many designers utilize OpenVPX or its general mechanicals for their designs. Combining advanced RF or other device capability into the standard sized modules for the VITA 46/48 architecture is not always practical. To support this trend, Pixus has developed both 19” commercial and rugged rackmount chassis with special card guide trays and deeper card cages.

The front-to-rear cooled enclosures support standard 80mm Rear Transition Module (RTM) space on the back side of the backplane as well as customized versions for longer RTMs. They are designed to MIL-STD-810 for shock/vibration/environmental and MIL-STD-461 for EMI.

About Pixus Technologies
Leveraging over 20 years of innovative standard products, the Pixus team is comprised of industry experts in electronics packaging. Founded in 2009 by senior management from Kaparel Corporation, a Rittal company, Pixus Technologies' embedded backplanes and systems are focused primarily on ATCA, OpenVPX, MicroTCA, and custom designs. Pixus also has an extensive offering of VME-based and cPCI-based solutions. In May 2011, Pixus Technologies became the sole authorized North and South American supplier of the electronic packaging products previously offered by Kaparel Corporation and Rittal.