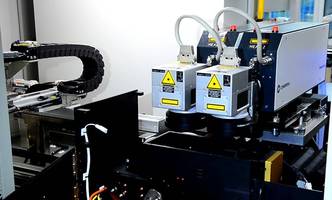 Santa Clara, CA, November 7, 2019 – The Coherent PowerLine® E Twin is a laser-based marking sub-system that can increase speed by as much as 100% for serialization marking of delicate and heat sensitive parts, such as semiconductor integrated circuits. Its unique combination of high speed, large marking field, ability to produce individual marks, and powerful control software make it well suited for marking ICs with serialization codes, performance specifications, traceability data, and anti-counterfeiting features.

The PowerLine E Twin is a Class IV laser sub-system comprising two diode-pumped solid-state lasers, two galvanometer scanners, and all associated drive electronics, control software, and chiller. The combination of twin lasers and scanners can simultaneously produce two different marks on a single work piece (which may consist of several, individual ICs on strip, tray or wafer-level). Additionally, it can cover a marking field as large as a 300 mm wafer or JEDEC tray, thus delivering double the effective marking speed of traditional, single laser products. With the PowerLine E Twin, the control of the independent lasers and scanners occurs internally; the operator just sees a single, easy-to-use interface that efficiently translates job specifications into the necessary operating instructions. The software also includes Matrix Object functionality; this enables it to use supplied part position data to mark arrays of products, such as multiple ICs at the wafer-level, in strips, or in handling trays.

The PowerLine E Twin is designed for easy integration, and is meant to be a straightforward replacement for single laser markers. For example, it avoids the cost of unnecessary duplication and utilizes only one power supply and chiller, and incorporates lasers and scanners in a single mechanical assembly. Moreover, the system integrator can rely on Coherent’s application expertise to develop and refine processes and optimize laser system parameters, thus taking maximum advantage of the higher speed and operational flexibility offered by the PowerLine E Twin.

Founded in 1966, Coherent Inc. is one of the world’s leading providers of lasers and laser-based technology for scientific, commercial and industrial customers. Our common stock is listed on the Nasdaq Global Select Market and is part of the Russell 1000 and Standard & Poor’s MidCap 400 Index. For more information about Coherent, visit the company's website at www.coherent.com for product and financial updates.