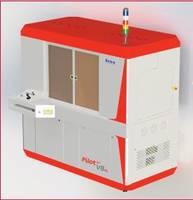 Pilot V8 Next> Series Flying Probe Systems are available in HR and XL versions and are capable of hosting from 1 to 12 magazines of boards to be tested. System provides up to 20 mobile resources for testing electronic board. HR version is used for probing miniaturized devices down to 30 µm whereas the XL version comes with work area measuring 800 x 650 mm that accommodates extra-large boards. The Pilot V8 Next> system includes laser sensors, capacitive probes, pyrometers and optical fiber sensors for LEDs.

Haverhill, June, 2018. Presented for the first time in US during IPC Apex, it will also be shown at Semicon West booth 509, Pilot V8 Next> series, the most versatile and performing flying probe system in the world, which represent yet another outstanding technological leap forward in Seica’s continuous “road” to innovation. This time it will be managed by Viva Next> 6, Seica’s latest evolution of its core management software platform, in a 64 bit version complete with a new graphical interface and a guided environment for creating test programs according to each specific requirement. The new platform continues to leverage its open architecture, further extending the capability of integration with third party software, such as TestStandTM, leaving programmers complete freedom to combine test sequences developed using various platforms in the same test program. In addition to the Seica OEM products described below Seica will also exhibit semiconductor solutions from Crea, OSAI and Microtest.

Pilot V8 Next > series, the most complete flying probe test platform on the market, provides up to 20 mobile resources for testing an electronic board, including test probes which can each apply currents up to 2 amps, high-resolution cameras for automatic optical inspection, barcode and data matrix reading capability, laser sensors, capacitive probes, pyrometers, optical fiber sensors for LEDs, minifixtures for boundary scan and On Board Programming, and high-frequency probes able to measure signals at frequencies over 1.5 GHz (an absolutely unique performance on the market). Engineered for medium/high volume production, the Pilot V8 Next > series is available in a fully-automated version, capable of hosting from 1 to 12 magazines of boards to be tested (even of different types) or for direct connection to board loading/unloading and tilt modules, compatible with any standard assembly line. The Pilot V8 Next > series can be configured to satisfy the full range of different board test requirements: the HR (high resolution) version extends the performance to include probing of extremely miniaturized devices (down to 30 µm), while in the XL version expands the standard work area of 610 x 540 mm to 800 x 650 mm, able to accommodate and test “extra-large” boards.

Pilot V8 Next> series , as all of the Next> series solutions, has Seica’s Industrial Monitoring Solution on board, with the potential for remote monitoring of current and voltage consumption, mains supply, temperature, light indicators and other parameters useful to indicate correct operation, to provide information enabling predictive maintenance and in general to render the systems compatible with today’s Industry 4.0 standards. In addition to the Pilot V8 features Seica will be discussing it’s embedded components test capability of it Rapid V8 Next> series line where we have probing capability down to targets below 2 mils ! A great solution for probe cards, MLO cards, interposers, ceramic/wafers, and glass plates.

During Semicon West at booth 509 will be possible to watch movies and get information on all Next> series systems, in particular about laser selective soldering, the Firefly system, the AOI solution called the Dragonfly, and latest bed of nails system Compact Slim.

The Firefly Next > series, represents a major technological advance in laser selective soldering. The result of a totally new design and engineering effort, it includes a state-of-the art high-efficiency LASER source, a new spot angle on the board to be soldered, a fully-programmable donut spot and the perfect integration on a single axis of the laser, vision system and temperature sensor. This enables simple calibration and provides continuous, closed loop feedback from the soldering process, which greatly surpasses the levels of performance available until now in terms of throughput, applicability, and reliability.

Dragonfly Next > series is an AOI system providing optical inspection capabilities of conformal coating (CC) as well as THT (through hole technology) components on electronic boards. Both the THT and CC versions of the Dragonfly include a SMEMA compliant rail conveyor, which is configured to inspect one or both sides of the board, and an intuitive and streamlined management software environment which enables the user to develop and deploy an application program in a few hours.

The Compact Slim is the latest addition to the Next> series. A very small (only 300 mm width) yet modular bed of nails tester especially suitable for deployment in a series of equivalent systems in a line, loaded either manually or via a COBOT solution. The system features a 180x300 mm test area with an automated receiver specifically conceived for robotic loading. There are 14 slots available for the ATE instrumentation, up to 6 user power supply units and an integrated control and management unit.

Discover the performance… at booth 509.

Founded in 1986, Seica S.p.A. is a global supplier of automatic test equipment and selective soldering systems, with an installed base of more than 1900 systems on 4 different continents. Seica offers a complete line of test solutions, including bed of nails and flying probe testers able to perform MDA, in-circuit and full functional tests of assembled electronic boards and modules and printed circuit boards, as well as LASER-based selective soldering systems for electronic board manufacturing and a full range of test application services. Company headquarters are located in Strambino, Italy, with direct offices in USA, Germany, China, Mexico and France, supported by a vast distribution network covering the rest of the world. Since 2014, Seica S.p.A. is supported by a sister company Seica Automation, located in Milan, and producing board handling systems and other automation equipments for the electronic manufacturing industry.

Since 2017 Seica Inc. has been a distributor of OSAI, Crea and Microtest semiconductor test and assembly products in North America.