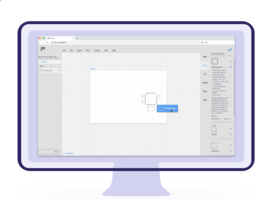 PCBs are a distinct need for IoT device makers, entrepreneurs, crowd-funded startups, product developers, hobbyists, and cosplayers whose hardware projects can't be satisfied by off-the-shelf components like Raspberry Pi or Arduino, due to the final product's size, shape, or power requirements.

Typically, hardware developers are forced to overpay for small runs of PCBs and have suffered from slow turnaround times and the use of poor-quality materials by existing PCB manufacturers in both the United States and abroad.

By integrating with Royal Circuits, a preeminent U.S. PCB manufacturer whose customers include Tesla, 3M, Amazon, and Honeywell, Patchr becomes the only fully integrated, end-to-end design and manufacturing solution on the market. Whereas other PCB design platforms outsource manufacturing to third parties, providing a disjointed user experience, Patchr and Royal Circuits have integrated their respective software systems to allow for immediate, top-quality manufacturing once projects are completed in Patchr's platform.

"Hardware development is becoming more and more democratized, and we are adding to this by partnering with Patchr. By vertically integrating and offer turn-key solutions through their CAD tool, Patchr allows for a more seamless and intuitive design-through-manufacturing flow that allows users to get hardware in their hands faster and with more accuracy than ever before," says Mihir Shah, Director of Special Projects at Royal Circuits. "Instant ordering, custom quotes, and direct communication with the fabrication house is a game-changer never seen before in the industry."

As a special launch promotion, Patchr is offering 15% off PCB manufacturing from Aug. 1-14, 2019 with promo code: GoPatchr. In addition, anyone can share Patchr's manufacturing news on Twitter for a chance to win $150 in PCB manufacturing. Details are available at patchr.io/build.

Patchr is an Austin-based company focused on democratizing hardware design through its drag-and-drop software-as-a-service platform for printed circuit board (PCB) design and manufacturing. Enterprises, startups, and hobbyists who specialize in electronics projects ranging from IoT to cosplay use Patchr's platform to iterate more quickly on their prototypes and reach sleek, functional, fully realized final designs. Through its direct software integration with premier manufacturer Royal Circuits, Patchr is the only fully integrated, end-to-end PCB design and manufacturing solution on the market.