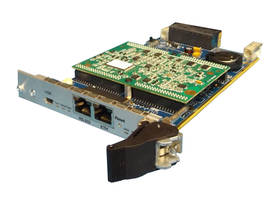 Waterloo, Ontario — Dec 04, 2019 – Pixus Technologies, a provider of embedded computing and enclosure solutions, now offers a chassis management module for OpenVPX that is compliant to the VITA 46.11 specification for system management.

The SHM200 chassis manager for OpenVPX comes in 0.8” or 1.0” pitch sizes. The unit can plug into a standard 3U VPX backplane slot, with versions with just the P0 connector or the P0/P1 connectors for access to extended I/O. A 6U panel can also be affixed to plug into a 6U slot. The standard panel interface has RS-232, RJ-45, USB and LEDs.

Monitoring of at least 6 temperature sensors and 10 fans is available on the SHM200 with custom options available. There is fan PWM/Tach control, along with 16 digital inputs and outputs. A Level-2 unmanaged 3- port Ethernet hub is also an option.

The Pixus SHM200 solution also includes a Web interface to remotely query the system. The user can import images of their boards. By clicking on the image for each slot, the user can drill down to the monitored status of the module.