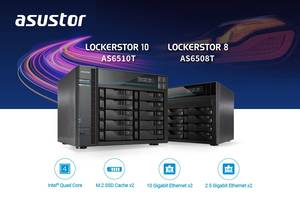 The Lockerstor 8 and 10 Have Arrived with All Business in The Front and No party in The Back!

Taipei, Taiwan, 25 November 2019 – ASUSTOR Inc. is thrilled to be unveiling the newest line of business NAS devices: The eight bay Lockerstor 8 and ten bay Lockerstor 10. These new NAS devices feature Intel’s Denverton-based Atom Quad-Core processors. The Lockerstor 8 and 10 provides faster-than-ever transfer speeds with the two Intel 10-Gigabit ports and two Realtek 2.5-Gigabit ports. The new Lockerstor series also feature a better intelligent fan control as well as an improved fan design, which contributes to an optimal airflow solution, ensuring all components get the best cooling as well as the best performance. For even more performance, combine the dual 10-Gigabit ports on a managed switch up to double the performance of 10-Gigabit.

The Lockerstor has access to ASUSTOR's App Central, which provides more than two hundred apps on ADM 3.4, including, but not limited to commercial and office applications, website building, forum management, virtualization and digital learning. The Lockerstor 8 and 10 make a great backup solution that protects your data by allowing a number of login errors to be set, two-step verification settings and automatic blacklists that helps prevent malicious attacks and reducing risk. The Lockerstor 8 and 10 also incorporate enterprise-class software and hardware, being compatible with VMware, Citrix, and Hyper-V storage environments. By supporting iSCSI/IP-SAN and NFS, the Lockerstor 8 and 10 seamlessly integrate existing IT environments to provide an even more cost-effective storage solution than ever before.

Founded in 2011, ASUSTOR Inc. was established via direct investment from ASUSTeK Computer Inc. The ASUSTOR brand name was created as a portmanteau of “ASUS” and “Storage”. ASUSTOR is a leading innovator and provider of private cloud storage (network-attached storage) and video surveillance (network video recorder) solutions, also specializing in the development and integration of related firmware, hardware and applications. We are devoted to providing the world with unparalleled user experiences and the most complete set of network storage solutions possible.