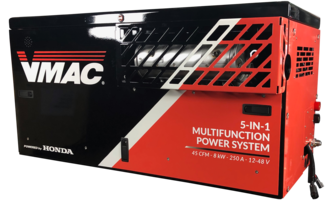 Louisville, KY – VMAC revealed its new prototype concept, a 5-in-1 Multifunction Power System with a Honda engine at this year’s International Construction & Utility Equipment Exposition (ICUEE). This was the first public look at the prototype, which was met with excitement and enthusiasm during The Demo Expo.

“Our new Multifunction concept with a Honda engine offers greater power and a smarter design,” said Mike Pettigrew, VMAC’s Marketing Manager. “We took all the best parts of a traditional gas and diesel multi-power systems and then made it better. Operators with gas vehicles will get more value from our new 5-in-1 Multifunction.”

VMAC’s new Multifunction concept is powered by a Honda iGX800 V-twin gas engine, provides up to 40 CFM at 100 psi of compressed air and 8kW of electric power at 100% duty cycle, and up to 250A of welding capability. The system allows operators to use just one function or all five simultaneously.

Like all VMAC Multifunction Power Systems, the 5-in-1 reduces idling by allowing operators to turn off their truck engines at the job site. Minimized idling helps reduce noise on the jobsite, reduce fuel costs, and reduce operating hours and engine wear on the vehicle.

“We have had a really positive response to our new gas-powered Multifunction,” said Gord Duval, VP of Marketing & Sales at VMAC. “Many of our customers already love Honda engines because they are powerful and reliable, and it’s our pleasure to develop another product that’s officially Powered by Honda.”

VMAC expects to release the 5-in-1 Multifunction with a Honda engine into production in 2020.

VMAC is the leader in compressed air innovation® and one of the only true air compressor manufacturers in North America. An award-winning organization, VMAC was named one of Canada’s Best Managed Companies for 2019 and is Great Place To Work Certified™. With over 30 years of history, VMAC’s mobile air compressors and multi-power systems have earned a reputation for extraordinary design, build quality, durability, and reliability in extreme conditions among operators and fleet managers worldwide.