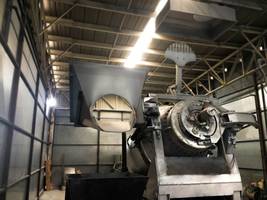 PyroGenesis’ Mini-DROSRITE™ System is designed for dross streams such as aluminum, copper and zinc and can process 500 tons of dross/year. The system prevents the loss of metal and reduce carbon footprint. Unit is salt-free and does not produce hazardous by-products.

Mr. P. Peter Pascali, President and CEO of PyroGenesis, provides this update in the following Q&A format. The questions are for the most part derived from inquiries received from investors, analysts, and potential customers:

Q. For those that are new to the story, could you please describe to us what DROSRITE™ is and some of its many advantages?

With metal manufacturers, such as aluminum, being subjected to increased pressure from regulatory authorities to eliminate landfilling of hazardous salt cakes from traditional recovery operations, combined with tight operating margins, PyroGenesis’ DROSRITE™ system is able to (i) increase metal recovery from waste, without producing any hazardous by-products, while at the same time (ii) reducing operating costs.

In short, our DROSRITE™ system is (i) salt-free, so no hazardous by-products, (ii) can process the dross cheaper than conventional methods, and (iii) has demonstrated higher metal recovery rates. Who could ask for more?

Click on the link below to watch the DROSRITE™ video:

Q. What is a Mini–DROSRITE™ System?

A. It is a system that can process dross in much smaller capacities. The Mini - DROSRITE™ System can economically process 500 tons of dross/year as compared to the 3,000-7,500 tons/yr that our current systems are designed for. This smaller system enables us to target thousands of smaller facilities which were not originally in our target market. The price tag of $600k has a similar pay-back for clients as our original designs.

Q. How big is this market for Dross?

A. We have targeted three (3) main dross streams; aluminum, copper, and zinc, each divided between primary, secondary and casting producers. Presently we are focusing on the three segments within aluminum dross, and we recently announced our expansion into primary zinc production with a paid-for-demonstration in India for such.

A table accompanying this announcement is available at http://www.globenewswire.com/NewsRoom/AttachmentNg/a1ad3ce0-184b-4b8b-b0bb-9c59127a591a

Our original estimate of the total dross produced was vastly underestimated. It was a conservative calculation derived from world-wide aluminum production figures. We estimated that total aluminum dross produced was between 1.5 - 2 million tonnes per year, and that represented a potential market for DROSRITE™ systems numbering in the hundreds of units. Based on a recent report in AlCircle “Aluminum Dross Processing: A global review”, which references exact dross production, total aluminum dross produced is over 3 million tonnes per year, more than double what we estimated. Combined with the increased market penetration we now have with the Mini-DROSRITE™ design, we estimate the market for DROSRITE™ to be in the thousands of units and not the hundreds of units we originally estimated.

Q. You mentioned your expansion into Zinc Dross handling. Can you give us an update?

A. Everything is on schedule. Our demonstration system should be on site within two (2) weeks. Demonstrations will begin immediately and last approximately one (1) month. Given the price of zinc relative to aluminium (zinc prices are $1.37/lb compared to aluminum which is $0.99/lb) we expect the economics to be significantly better than our aluminium DROSRITE™ systems.

Q. With this news and the previously announced paid-for-demonstrations, we would have expected some signed contracts by now. Is the DROSRITE™ business line still poised to be a significant contributor in 2018? Is there still a high probability that PyroGenesis will be profitable in 2018 from DROSRITE™ system sales alone when combined with backlog?

A. DROSRITE™ is certainly poised to be a major contributor in 2018 and we absolutely see it being a significant reason behind profitability.

We fully expected to have additional contracts signed by now, but we are definitely not disappointed with where we are, particularly when taken in context of the full year. Cultural differences, time zones, political unrest and religious holidays have all played their part in negotiations and schedules. An additional unanticipated element is that since we now have a fully operational system in place there have been requests for site visits which, again, take time. Notwithstanding these developments and given the continued demand we have for paid-for-demonstrations, we are confident with respect to the estimates we projected for this business line for 2018 and beyond.

Let us also put these developments in their proper perspective. After our first system was accepted by our client in Q3 2017, we did not expect a second sale until the second half of 2018. Notwithstanding that, we did close our second system sale before the end of 2017, and as such we were significantly ahead of schedule with that estimate.

With respect to future sales, it is hard to estimate with pin point accuracy as we are introducing a new product to the market and have little data to go by, so it is not unreasonable to be off by 3-4 months. However, having said that, we believe that orders should be concluded very shortly. I liken it to trying to estimate when a tidal wave will reach shore. You have a good idea it’s coming, you cannot estimate the time exactly, but you do know when it hits there is going to be a lot of water behind it. That is exactly what is happening with DROSRITE™.

A. We mentioned in an earlier press release that the important take a way is that the demand for PyroGenesis’ DROSRITE™ system is gaining traction faster than expected. This is truer today than it was when we first noted it.

Two major breakthrough developments over the last six months, which will have a major impact on DROSRITE™ revenue streams are (i) PyroGenesis’ expansion into zinc recovery, and (ii) today’s unveiling of the Mini-DROSRITE™ system which opens up the market to thousands of smaller smelters.

Giving the activity in this business line and the economics of a DROSRITE™ system, management is currently looking at new business strategies by which they can increase shareholder value outside of being a simple system supplier.

PyroGenesis Canada Inc. is the world leader in the design, development, manufacture and commercialization of advanced plasma processes. PyroGenesis provides technical and manufacturing expertise, cutting-edge contract research, as well as turnkey process equipment packages to the defense, metallurgical, mining, additive manufacturing (3D printing), oil & gas, and environmental industries. With a team of experienced engineers, scientists and technicians working out of our Montreal office and 3,800 m² manufacturing facility, PyroGenesis maintains its competitive advantage by remaining at the forefront of technology development and commercialization. Its core competencies allow PyroGenesis to lead the way in providing innovative plasma torches, plasma waste processes, high-temperature metallurgical processes, and technical services to the global marketplace. Its operations are ISO 9001:2008 certified, and have been ISO certified since 1997. PyroGenesis is a publicly-traded Canadian corporation on the TSX Venture Exchange (Ticker Symbol: PYR) and on the OTCQB Marketplace (Ticker Symbol: PYRNF). For more information, please visit www.pyrogenesis.com