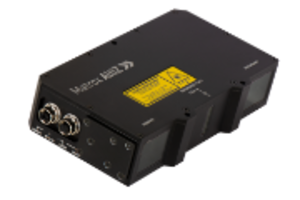 Matrox Imaging Lasers in with Launch of 3D Profile Sensors

These fully integrated 3D profile sensors boast an optimized design that greatly lessens scanning gaps. Simultaneous viewing of the laser line by the Matrox AltiZ’s two opposed optical sensors reduces optical occlusions—frequently encountered at critical surface junctures—caused by the laser line being obstructed from the view of a single image sensor because of a surface’s orientation.

Designed for superior image fidelity
Offering the most elegant solution possible for combating occlusion effects, Matrox AltiZ 3D profile sensors achieve something common 3D profile sensors—equipped with a single laser and single optical sensor—cannot. Matrox AltiZ stand apart from the competition in terms of their dual optical-sensor design and data-fusion capability, which offers higher 3D reproduction fidelity through their ability to combat occlusion and outlier data. The Matrox AltiZ delivers incredibly high levels of control over spurious data, providing more robust reproductions than achievable with other models on the market.

Whether mounted on the end of a robot arm or fixed to a gantry overlooking a conveyor, the Matrox AltiZ deliver superior reproductions of a 3D object or scene. Data is represented as individual profiles, a depth map, or a point cloud.

Configured for optimal versatility
The integrated image sensors of the Matrox AltiZ can work in either synchronized or alternate fashion. In synchronized mode, this 3D profile sensor achieves maximum reproduction quality and robustness; configured in alternate mode, the Matrox AltiZ’s scanning rate is almost twice that of the synchronized configuration while still providing key defense against occlusion.

Regardless of the configuration chosen, the Matrox AltiZ is ideally suited for inspection tasks, delivering two powerful cameras within a single compact enclosure, and an IP67 rating ensuring its performance in tight spaces and harsh industrial environments.

An overview of the Matrox AltiZ and its key features can be found in this product tour video.

“Matrox AltiZ is an entirely new product line born from the market demand for superior 3D reproduction fidelity,” says Sam Lopez, vice-president of sales and marketing. “It is the culmination of a significant investment, not only in terms of product development, but also in the associated state-of-the-art manufacturing installations.”

Availability
Matrox AltiZ will be officially released in Q3 2020.